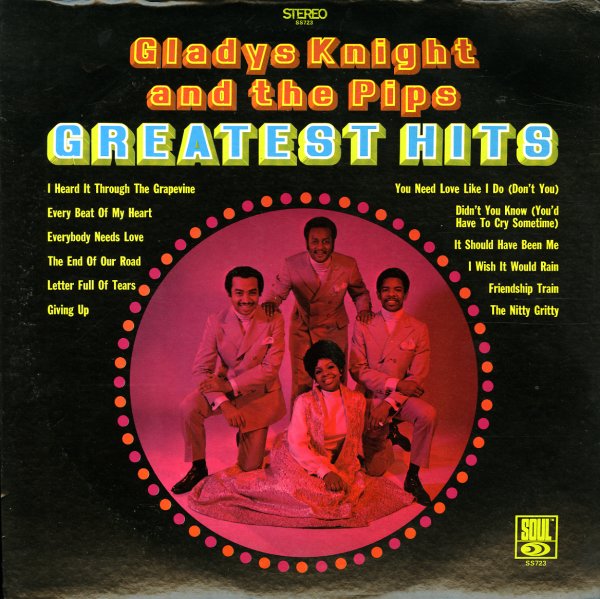 Although Gladys Knight & The Pips didn't cut their first recordings or their biggest recordings for Soul/Motown, they did still do a pretty nice job at the label – as you'll hear on this nice collection that brings together a nice batch of their best tracks. 12 tracks in all, including "Every Beat Of My Heart","Letter Full Of Tears", "Everybody Needs Love", "I Heard It Through The Grapevine", "The End Of Our Road", "I Wish It Would Rain", "You Need Love Like I Do (Don't You)" and "It Should Have Been Me".  © 1996-2022, Dusty Groove, Inc.
(Original pressing. Cover has some edge wear and a cutout notch.)

About Love
Columbia, 1980. Near Mint-
LP...$4.99
Gladys Knight with Ashford & Simpson – a perfect pairing of two post-Motown talents! Gladys Knight & The Pips are one of those groups that never stopped being great – and later albums like this are well worth tracking down, especially with the team of Nick Ashford and Valerie ... LP, Vinyl record album

I Feel A Song
Buddah, 1974. Near Mint-
LP...$4.99 6.99
Rock-solid Buddah work from Gladys Knight & The Pips – still pretty righteous on the vocal tip, but often a bit fuller and more polished than before! Knight shows a great talent for a mature ballad here – no big hits, but that's part of the charm of the set – as there's a ... LP, Vinyl record album

Imagination
Buddah, 1973. Very Good
LP...$4.99
A pivotal album for Gladys Knight and group – as the record features their super-huge hit "The Midnight Train To Georgia", a landmark track that not only had a catchy pop hook, but which spoke volumes about African-American migration in the postwar years. The track's one of those ... LP, Vinyl record album

Naturally Together
SOUL, 1970. Very Good+
LP...$9.99
Great group vocals by one of Motown's biggest groups to never really make it. This album has some of their best cuts, with a sweet harmony sound, and raw production that works quite well with the band's approach. The best example of this is the cut "We Can Make It Baby", but other nice ... LP, Vinyl record album