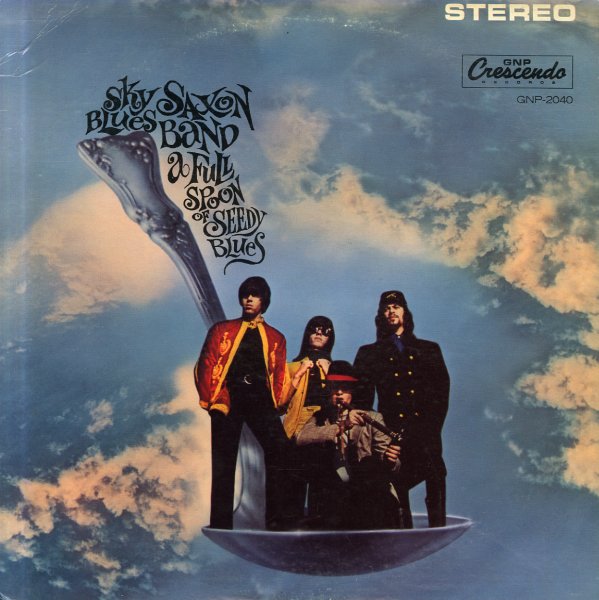 Wicked work from the great Sky Saxon – an early record that really gets at the sheer raw power of his best work! Despite the title, the album's hardly a straight set of blues – more a blend of hard rock, psychedelia, and rootsy influences – in the manner of some of the earliest work by Love, but perhaps with more of a Chicago electric approach. Saxon wrote most of the tunes – and titles include "Moth & The Flame", "I'll Help You", "Cry Wolf", "The Gardener", and "Creepin About".  © 1996-2022, Dusty Groove, Inc.
(Original red label stereo pressing. Cover has some ring and edge wear, a small sticker at the bottom right corner, and some splitting in the bottom seam.)

Raw & Alive – The Seeds In Concert – Merlin's Music Box
GNP, 1968. Near Mint-
LP...$33.99
One of the great fake live albums of the 60s – a set that promises to be a concert performance from the title and cover, but which actually just features The Seeds playing live together in the studio! Yet that little trick is hardly a problem – because the album's the last-ever from ... LP, Vinyl record album

Sticky Fingers
Rolling Stones, 1971. Near Mint-
LP...$79.99 (CD...$6.99)
Landmark work from The Rolling Stones – and a set that may well stand alongside Exile On Main Street for capturing the group at their height! The record's got the Stones very much in their own space – years from just putting a UK spin on American blues – and instead, finding a ... LP, Vinyl record album

Cuban Carnival (2nd cover)
RCA, 1956. Near Mint-
LP...$14.99
One Tito Puente's finest albums for RCA, with a tight hard bunch of cuts that have a Cuban big band sound, and a lot more drive to them than some of Tito's other work for the label. Ray Bryant wrote the great track "Cuban Fantasy", and Tito contributed most of the other tunes on the set ... LP, Vinyl record album