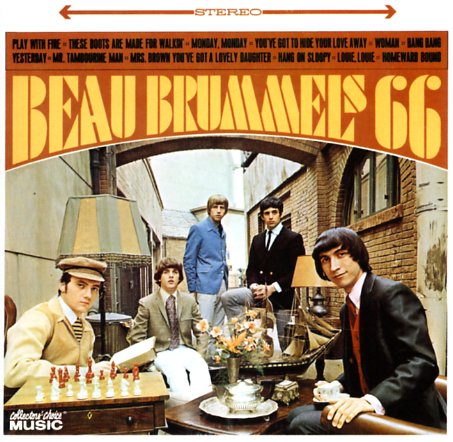 The Beau Brummels' debut for Warner Brothers – surprisingly, a record of all cover versions – but one that's still plenty darn great! Although the tunes here are all quite familiar, they're also give some pretty unique treatment – often Brummel-ized with a mix of rootsier rock influences, and topped with tremendous lead vocals from Ron Elliott – easily one of the most distinct voices of his generation! Elliott's inflections and the group's instrumentation really turn these tunes into something new – and the album's a great illustration of the old adage that "it's not the song, but the singer!" Titles include "Bang Bang", "Play With Fire", "Woman", "Yesterday", "You've Got To Hide Your Love Away", "Homeward Bound", "Mrs Brown You've Got A Lovely Daughter", and "Monday Monday".  © 1996-2021, Dusty Groove, Inc.
(Mono gold label pressing.)

Beau Brummels Vol 44
Vault, Mid 60s. Near Mint-
LP...$13.99
A cool collection of early work from The Beau Brummels – material done for Autumn Records before their headier days at Warner – cut with a style that could well make the group a key force to stop the British Invasion of the 60s! There's a great sense of jangle-pop throughout – a ... LP, Vinyl record album

Triangle
Warner, 1967. Sealed
LP...$43.99
A tremendous album from The Beau Brummels – one of the lesser-remembered groups from the late 60s Warner hipster heyday! At some level, the group's a folk-rock outfit – with the left-of-center feel of some of Fred Neil's best work for Capitol, and a similar blend of east coast honesty ... LP, Vinyl record album

Sabbath Bloody Sabbath
Warner, 1973. Near Mint-
LP...$59.99 (CD...$26.99)
The grandest scale and most elaborately furnished Black Sabbath album to this point – but they still bring the heavy! The title track is one of the most influential metal songs ever, with the foreboding lyrics, trudging stomp of a rhythmic pace and those bridges that are almost pretty – ... LP, Vinyl record album