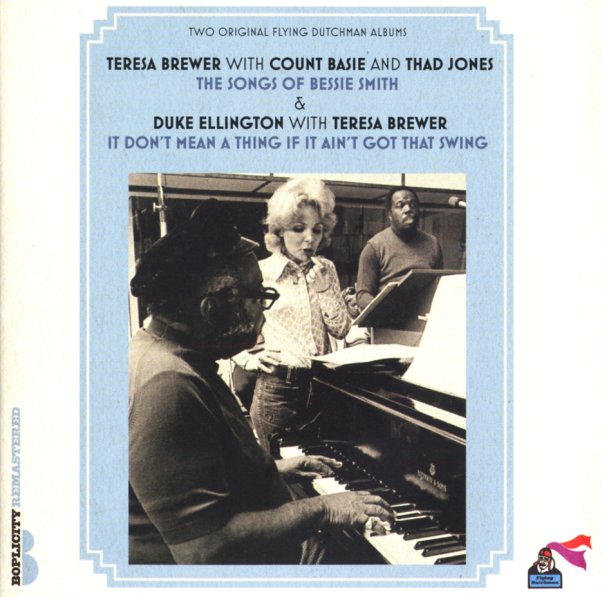 A pair of later jazzy vocal LP gems by Teresa Brewer, both backed by jazz greats – Songs Of Bessie Smith with Count Basie and Thad Jones, and It Don't Mean A Thing If It Ain't Got That Swing with Duke Ellington – both released by Flying Dutchman in 1973! Teresa's popularity peaked a couple decades earlier as a girlish pop singer, and she succeeds strongly on both records – not just because of the jazz heavies in the band, but because she has the pipes and genuine affection for the material to pull it off. It's lovely stuff! Songs Of Bessie Smith have the bluesy overtones necessary to make it work, without trying the hide Teresa's naturally softer approach. Basie on piano throughout, with arrangements by Jones, and a great big band on half and more intimate arrangements on the other half. It Don't Mean A Thing. . .works just as wel, with Duke Ellington and Ernie Wilkins arrangements, and great Flying Dutchman players that include Bernard Purdie, Joe Beck and Mtume. 20 tracks in all, including "Trombone Cholly", "Gmme A Pigfoot", "I Ain't Got Nobody", "St Louis Blues", "I Ain't Got Nothing But The Blues", "Mood Indigo", "I'm Beginning To See The Light", "I've Got To Be A Rug Cutter", "Tulip Or Turnip", "I'ts Kinda Lonesome Out Tonight" and more.  © 1996-2021, Dusty Groove, Inc.