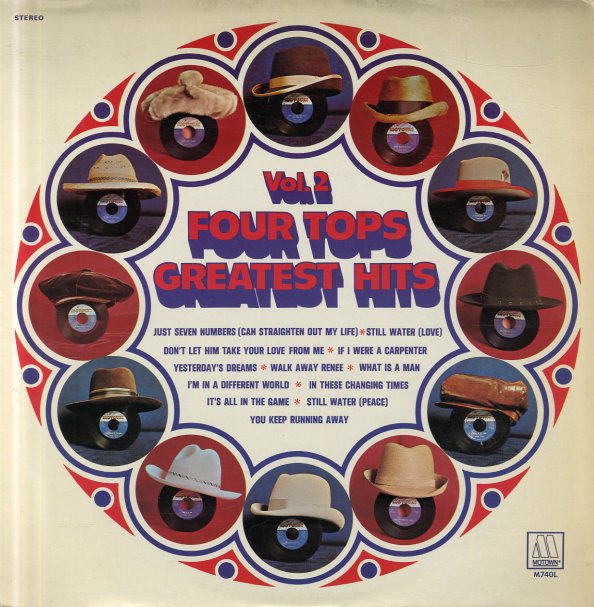 Given how much you hear this sort of stuff on the radio, you could easily forget that the Four Tops are actually a heck of a great vocal group, with harmonies that blew away many of their contemporaries, and which keep their work shining long past the hits. This second volume of hits has 12 tracks, including "In These Changing times", "Still Water (Love)", "Still Water (Peace)", "Don't Let Him Take Your Love From Me", "What Is A Man", "You Keep Running Away" and "Yesterday's Dreams".  © 1996-2021, Dusty Groove, Inc.
(German black label Tamla pressing. Cover has a partially unglued seam and light wear.)

Changing Times
Motown, 1970. Very Good+
LP...$14.99
A very hip album from the Four Tops – cut with kind of a political/social edge, and a heavy vibe that was similar to what the Temptations had been using on some of their important albums for Motown at the end of the 60s. In fact, this one's got so much of that righteous Temps vibe that we ... LP, Vinyl record album

Four Tops Live
Motown, 1966. Near Mint-
LP...$13.99
One of the hardest, rawest Four Tops album on 60s Motown – a unique live session, recorded at the Roostertail Nightclub in Detroit – with a sound that shows that the Tops could maybe shine even more away from the studio! Levi Stubbs' leads are especially incredible – not just a ... LP, Vinyl record album