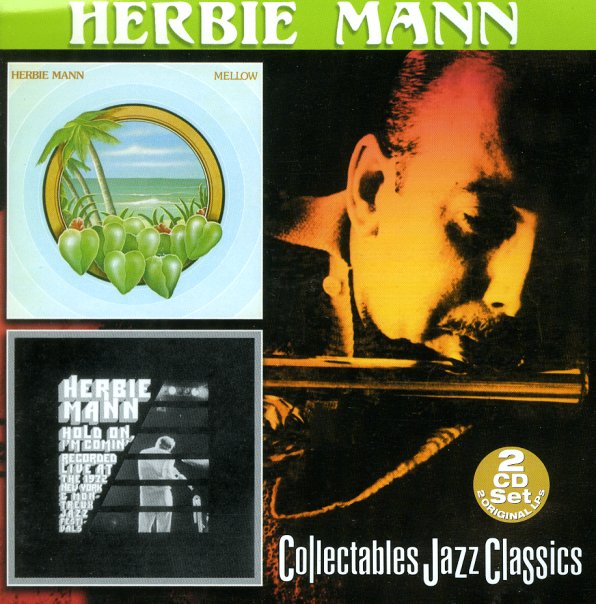 Mellow is a warmly laidback album, but one with more than enough sense of variety and depth to ever keep it from being too mellow overall! Herbie Mann's stepping out past the disco years here with a nice sense of variety – a style that avoids some of the fusion cliches of the time, and instead goes for some great elements that really work well with his flute! Some of these cuts have Herbie adding in an echoplex to the instrument, creating this really spacious tone – while others mix the lead with some reggae backings recorded in Kingston, an approach that works surprisingly well – and overall, the whole thing's got a really creative, electric exploration of space and sound that rivals some of Mann's first electric albums from a decade or more before. Titles include a wonderful reading of Milton Nascimento's "Cinnamon Flower", a completely different sweet funky take on "Memphis Underground", a version of Stevie Wonder's "Another Star", and the cuts "Cecilia", "Sir Charles Duke", and "Bend Down Low". Hold On, I'm Comin' hails from almost a decade earlier, recorded before very enthusiastic audiences at the New York and Montreux festivals in 1972. All tracks are long and pretty darn lively – and Herbie's group still includes Sonny Sharrock on guitar, plus the groovy Pat Rebillot on piano, and David Newman on tenor and 2nd flute. Titles include "Soul Beat Momma", "Never Can Say Goodbye", "Respect Yourself", "Memphis Underground", and "Hold On, I'm Coming".  © 1996-2020, Dusty Groove, Inc.
(Out of print.)

Hold On, I'm Comin'
Atlantic (Japan), 1973. Used
CD...$14.99
Great early 70s work from Herbie Mann! By this point in his career, Herbie must have had a fleet of cars, a harem of ladies, and a golden flute. You can hear his success in the live material that makes up the album – recorded before very enthusiastic audiences at the New York and Montreux ... CD

Live At The Whisky A Go Go
Atlantic (Japan), 1969. Used
CD...$19.99
Herbie Mann kicks Johnny Rivers off the stage of the Whisky A Go Go – and serves up some amazing long tracks that really redefine the sound of jamming on the Sunset Strip! The album's quite unusual for the time – in that it features two long tracks, which each run a side apiece – ... CD

Reggae
Atlantic/Wounded Bird, 1974. Used
CD...$14.99
A surprisingly strong mix of 70s modes happening here – as the funky flute of Herbie Mann takes on some of the nascent reggae grooves of the time – with results that are a lot nicer than you might expect! There's some core rhythms on the record from Tommy McCook, but Herbie's regular ... CD