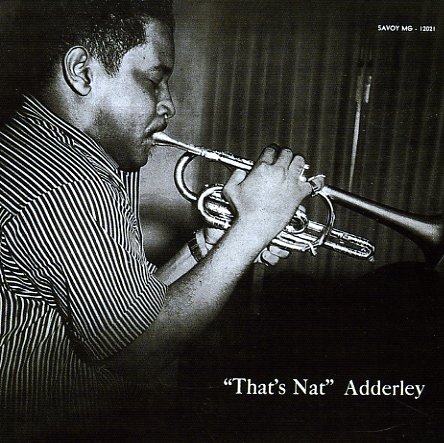 A real smoker from a young Nat Adderley – a session that has the leader on cornet, working in a tight hardbop combo with Jerome Richardson on tenor and flute, Hank Jones on piano, Wendell Marshall on bass, and Kenny Clarke on drums! The tracks are all nicely sharp-edge – that soulful Savoy sound of the mid 50s – and Richardson is especially nice, really getting a great sound from both his tenor and flute. Tracks are somewhat long, with good room for solos – and titles include "Porky", "I Married An Angel", "Kuzzin's Buzzin's", and "You Better Go Now".  © 1996-2020, Dusty Groove, Inc.
(Out of print.)

Autobiography
Atlantic (Japan), 1965. Used
CD...$19.99
A gem of a record from Nat Adderley – filled with short soulful groovers, and done with an upbeat vibe that rivals some of Cannonball's best of the 60s! Joe Zawinul handled the arrangements, so there's definitely a strong influence here from the Cannon group – and although the players ... CD

Master's Touch
Savoy, 1944/1949. Used
CD...$2.99
A rare Savoy album that compiles sides cut previously for the label by Pres – all apparently during the late 40s years, with players that include Roy Haynes, Junior Mance, Billy Taylor, Cozy Cole, Harry Edison, Buddy Tate, and others. Tracks are offered in master takes, and alternate ones ... CD

Kenny Clarke Meets The Detroit Jazzmen
Savoy/Nippon (Japan), 1956. Used
CD...$8.99
One of the first albums from guitarist Kenny Burrell as a leader – a date that has him working with players from his hometown scene in Detroit – in case you couldn't guess from the title! Kenny's style here is a bit different than on the Blue Note dates of the time – almost a bit ... CD

Monday Stroll (aka Opus In Swing)
Savoy, 1957. Used
CD...$11.99
An expanded version of Opus In Swing – one of the greatest of the 50s Savoy "Opus" albums, and a loosely-done blowing session that's got a really unique feel! Instead of piano, the session features two guitarists – Kenny Burrell in lead and handling solos, and Freddie Greene ... CD