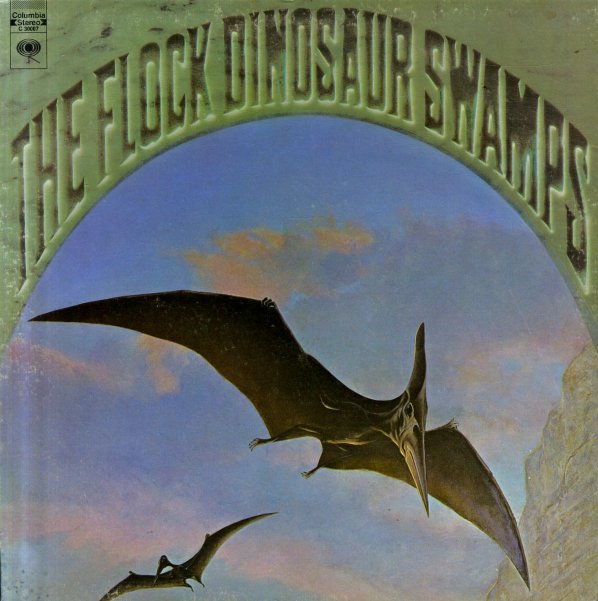 A slightly different sound than previously from The Flock – a set that brings in some sweet Hammond organ to the group's mix of jazzy horns and freewheeling guitar and violin – all in a way that even makes the whole thing better than before! The organ is never too jamming, but used at times to give the music a subtle majesty – and at other times to maybe percolate a bit more soul – while the previous instrumentation on guitar, violin, trumpet, and saxes is only even better than before – really setting these guys apart with one of the most unique visions in American jazz rock – especially when they maybe hit a few other musical roots too. Titles include "Green Slice", "Big Bird", "Hornschmeyer's Island", "Crabfoot", "Mermaid", and "Uranian Sircus".  © 1996-2022, Dusty Groove, Inc.
(US pressing. Cover has light wear and a cut corner.)

Nashville Skyline
Columbia, 1969. Very Good
LP...$19.99 (CD...$2.99)
Dylan's wonderful foray into country rock – the great Nashville Skyline! He takes his voice into a strangely crooning arena that we hadn't heard from him before or since, kinda adding a mysterious vibe of the whole thing. Titles include a duet with Johnny Cash on "Girl From The North ... LP, Vinyl record album

Wish You Were Here
Columbia, 1975. Very Good+
LP...$44.99
A seminal set from 70s Pink Floyd – a set that took all the energy of Dark Side Of The Moon, and refined it into an even more complex sonic setting! The songs here move out spaciously – still very unified as an overall album, but often with all of these longer-form musical ideas, and ... LP, Vinyl record album

Full Sail
Columbia, 1973. Very Good+ Gatefold
LP...$2.99 (CD...$4.99)
A great mix of sophisticated pop and lighter, more tropical numbers – and one of the best albums ever to emerge from the union of Kenny Loggins and Jim Messina! The album's got a special place in our heart, thanks to the classic tune "Pathway To Glory" – an extended, slow-buil ... LP, Vinyl record album