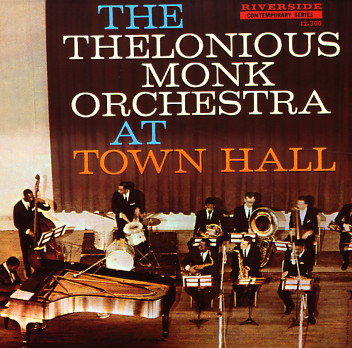 A unique large group effort from Thelonious Monk – but one that bristles with all the angular energy of his other great work for Riverside! The group here is a tentet – filled with excellent players who include Donald Byrd, Phil Woods, Pepper Adams, Eddie Bert, Robert Northern, and Charlie Rouse – all supported by rhythm from the team of Sam Jones on bass and Art Taylor on drums, possibly one of the key factors for the success of the record! The album's comprised of Monk classics like "Little Rootie Tootie", "Thelonious", "Friday The 13th", "Off Minor", "Crepuscule with Nellie" and "Monk's Mood" – all arranged by Hall Overton, a little-remembered modernist from the 50s, but one with a keen dedication towards pushing new sounds from old formats! Overton really keeps the spirit of Monk's music intact here – penning charts that allow for plenty of solo space and the kind of cross-trading lines you'd hear in some of Monk's best multi-horn small group sides for Riverside!  © 1996-2021, Dusty Groove, Inc.

Wes Montgomery Trio (aka A Dynamic New Jazz Sound)
Riverside/OJC, 1959. Used
CD...$3.99 (LP...$24.99)
Wes Montgomery's first album as a leader – a relatively obscure set that has him playing in a trio with Indianapolis bandmates Mel Rhyne on organ and Paul Parker on drums – a mode that strongly recalls Montgomery's roots in the Indy scene at the time! If you only know the later, famous ... CD

Everybody Likes Hampton Hawes – Vol 3 The Trio
Contemporary/OJC, 1956. Used
CD...$8.99
Maybe the title's a bit overly-optimistic – but with a record like this, you can certainly imagine a world in which everybody does like Hampton Hawes! The record's the third in a legendary early run for the Contemporary label – trio material that broke Hawes out of the box and firmly ... CD

For Real!
Contemporary/OJC, 1958. Used
CD...$8.99
A great set by Hampton Hawes – really one of his best ever records, and for a number of reasons! First up, Harold Land's playing tenor on the record, opening it up a lot more than some of Hamp's regular trio sides. Secondly, the bassist on the set is Scott LaFaro, the challenging modernist ... CD

All Night Session Vol 3 (with bonus track)
Contemporary/OJC, 1956. Used
CD...$11.99
A noteworthy session from pianist Hampton Hawes – a rare quartet session from the 50s (at a time when Hawes was mostly working in trios) – and also a three volume set of releases, all recorded in the space of a single night! The album is truly an All Night Session – as the ... CD