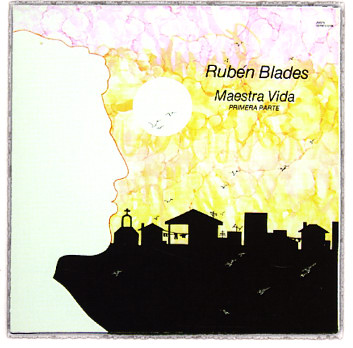 An amazing achievement for Ruben Blades – a full suite of tracks conceived and composed by Ruben as a "disco drama" on wax! The work isn't the disco-styled album you might think from this description – and is more of a mini-opera or concept album by Blades, one that features ambitious arrangements from Louie Cruz, Marty Sheller, and Carlos Franzetti – using strings and more standard Latin backings to expand the tunes tremendously, and make the whole album work with the full drama it requires. There's a few spoken bits on the set, which give way to some great songs – and the album also has a few instrumental passages. Willie Colon produced and supervised the whole effort – and tracks on the first part include "Prologo", "Manuela", "Carmelo (part 1)", "Dejenme Reir", and "El Nascimento De Ramiro".  © 1996-2020, Dusty Groove, Inc.
(Out of print, white back CRC/Fania pressing.)

Mazel Tov Mis Amigos
Riverside/Idelsohn Society, 1961. Used
CD...$12.99
A nice little album – despite what might be a gimmicky concept! The set offers up Latin versions of Jewish tunes – but even that's not much of a gimmick, when you consider how important the Jewish audiences were to the growth of Latin music in the New York in the 50s and 60s. From DJs ... CD

Saoco – The Bomba & Plena Explosion In Puerto Rico 1954 to 1966
Vampi Soul (Spain), 1950s/1960s. Used 2 CDs
CD...$16.99
A treasure trove of 50s and 60s music from Puerto Rico – and a killer compilation centered around the pioneering work of percussionist Rafael Cortijo and singer Ismael Rivera! Essentially, this a blueprint for the global salsa, tropical and Latin scenes to come – and it's invigorating ... CD

Viva Arsenio – Arsenio Rodriguez & The Afro-Cubano Sound Of Now!
Bang, 1966. Used
CD...$16.99
An incredible record and very unique – cut around the same time as Arsenio's rare boogaloo album for Tico Records! Like that session, this one has a style in which Arsenio is featured in a larger group – playing with a raspy edge that really steps out in front of the fuller instruments ... CD

Palenque, Palenque! – Champeta Criolla & Afro Roots in Colombia 1975 to 1991
Soundway (UK), Late 70s/1980s/Early 90s. Used
CD...$14.99
A killer collection of champeta work from the Caribbean coast of Colombia – music that still has plenty of local touches, but also shares a lot with African imports of the time – a really unique little hybrid that makes for plenty of heavy rhythms! The sound is quite unique – a ... CD