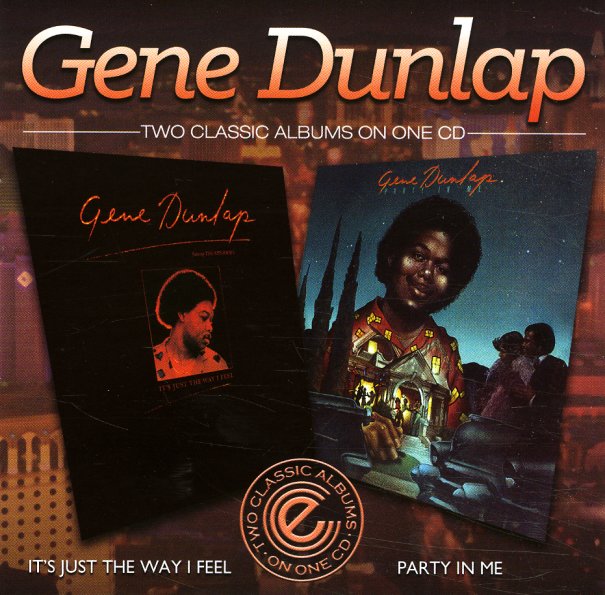 It's Just The Way I Feel/Party In Me

Two Capitol classics from the great Gene Dunlap – back to back on a single CD! First up is It's Just The Way I Feel – a classic soulful fusion album recorded and released during the crucial years of the "Capitol Rare" sound! Gene Dunlap is a jazz drummer at heart – but he's got a flair for the modern soul song – and in the same style as Norman Connors or Harvey Mason before him, he manages to put together a strong record of grooves and ballads from behind the kit! The strongest point of the record is work by The Ridgeways, a female soul trio who sing on the best tracks, giving them a smooth Jones Girls-ish kind of sound. The album includes two modern soul classics – "Before You Break My Heart" and "It's Just the Way I Feel" – plus "Love Dancin", "Rock Radio", "I Got You", and "Surest Things Can Change". Party In Me is wonderful work from Gene Dunlap – a jazzy soul drummer, and also a maestro with a killer ear for a modern soul groove! The album's got a mix of grooves and sophistication that are a bit like the best early 80s material from Roy Ayers – never chartbound, and never too commercial – but nice and tight, and really well put together! The instrumentation has plenty of jazzy 80s groove touches – especially in the keyboards – and Dunlap does a nice job of balancing up beat tracks with the mellow moments we love so much in his work. Vocals are from a variety of singers – including the great Ethel Beatty, who'd sung with Roy Ayers – plus Phillippe Wynne, Pam Lawson, and Gene himself – and titles include "Something Inside My Head", "Something Special", "Corner Pocket", "There Will Never Be Another (Like You)", "Party In Me", "Jam City", and "This One's On Me".  © 1996-2022, Dusty Groove, Inc.

Welcome To The Party – The Complete Recordings 1973 to 1980 (Wood Brass & Steel/Hard & Heavy/unreleased album)
Turbo/Soul Brother (UK), 1970s. New Copy 2CD
CD...$16.99 24.99
An essential collection of work from one of the hippest funk groups of the 70s – the mysterious Wood Brass & Steel, who also participated in the legendary Skullsnaps record! The first part of the set features an unreleased album that the group recorded for the All-Platinum label in 1973 ... CD