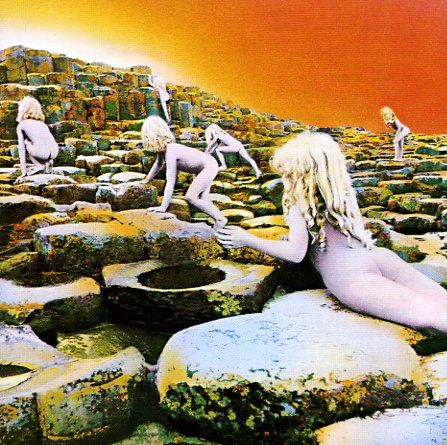 Also available
Led Zeppelin — Houses Of The Holy (remastered edition) ... CD 5.99
Led Zeppelin at peak power – mixing hard rock bombast with deep, genuine love for blues and folk guitars! Houses Of The Holy is the essential the blueprint for countless imitators to come – but it's also got smarts, subtleties and creative ambitious that's just plain lost on the watered wannabes that floated up in Zeppelin's wake. Titles include "The Crunge", "Over The Hills & Far Away", "The Song Remains The Same", "The Rain Song", "Dancing Days", "Dyer Maker", "No Quarter", and "The Ocean".  © 1996-2022, Dusty Groove, Inc.
(Beautiful pressing – heavy vinyl, heavy cover, and with paper title band too!)

Led Zeppelin III (180 gram pressing)
Atlantic, 1970. New Copy Gatefold (reissue)
LP...$25.99 26.98 (LP...$59.99)
The third in Led Zeppelin's spectacular run of early albums – each one either matching or topping its predecessor, depending on one's personal favorite – and a record with an influence that's as massive as the sound! The record's got a pair of of Zep's best-remembered songs in "Imm ... LP, Vinyl record album

Led Zeppelin (180 gram pressing)
Atlantic, 1969. New Copy (reissue)
LP...$25.99 26.98 (CD...$11.99)
One of the most monumental debuts in rock history – a record that hit the world like a led zeppelin, and left an impression for years to come! Led Zeppelin pretty much took over rock right from the beginning – which isn't too surprising, given that Jimmy Page had an in-demand guitar ... LP, Vinyl record album