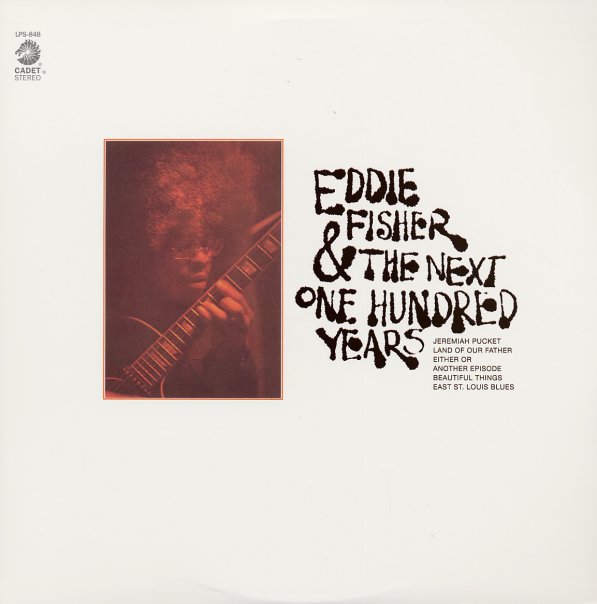 Eddie Fisher & The Next One Hundred Years

Madly tripped out guitar funk – and a real turning point in the career of guitarist Eddie Fisher! Eddie began his career as a straighter guitarist on the St Louis scene – and although his first album for Cadet was a relatively traditional soul-jazz outing, this one's a wild batch of tripped-out guitar licks! The band's a fuzzy psychedelic one – not in a rock-styled way, but more in an early George Clinton kind of mode, with plenty of rumbling bass at the bottom, warm electric piano lines, nicely placed drum beats, and Eddie's fuzzbox guitar snaking and wah wah-ing over the top! Eddie arranged and produced, and the record's a perfect batch of kicked-back stoner funk numbers that go on and on and on and on! Titles include "Land Of Our Father", "Beautiful Things", "East St Louis Blues", "Another Episode", "Either Or", and "Jeremiah Pucket".  © 1996-2023, Dusty Groove, Inc.
(Original blue label stereo pressing. Cover has light wear and a partially split top seam.)

Light My Fire
Cadet, 1968. Near Mint-
LP...$6.99
A masterpiece – one of 2 crazy albums in which Woody Herman's late band meets the Cadet arrangements of Richard Evans. You might think the combination wouldn't work – Woody's big band flourishes meeting up with Evans' compressed soulful grooves – but gosh, the record is simply ... LP, Vinyl record album

Ode To 52nd Street
Cadet, 1967. Very Good+
LP...$14.99
A really wonderful Chess/Cadet session from the 60s – not the bop-styled record you might expect from the 52nd Street reference in the title! Instead, the whole thing's more of a cool Chicago take on soul jazz – with these great large arrangements from Richard Evans, backing strong ... LP, Vinyl record album

Dancing In The Street
Cadet, 1967. Very Good+ Gatefold
LP...$7.99
A late 60s groover from the second Ramsey Lewis trio – the one that features Cleveland Eaton on bass and Maurice White on drums, both doing a pretty great job of filling the spot vacated by Eldee Young and Red Holt! The album's a live one, cut in the successful mode of Ramsey's records with ... LP, Vinyl record album

Interaction (2LP set)
Cadet, 1956/1960/1965. Very Good+ 2LP Gatefold
LP...$6.99 9.99
A 2LP set that features the core album Interaction by Stitt & Sims – plus a lot of additional material from other albums. The core set was recorded in Chicago after the two had played together at the Plugged Nickel in the Windy City! Backing is by the trio of John Young – who ... LP, Vinyl record album

Involvement
Cadet, 1967. Very Good+
LP...$4.99 6.99
Beautiful early work from John Klemmer – one of the most under-rated talents of his generation, and a great player who frequently gets overlooked because of his later, smoother work. This album is Klemmer's first – recorded with a soulful Chicago tenor sound, touched with some of the ... LP, Vinyl record album

Inter-Action
Cadet, 1965. Very Good
LP...$5.99 (CD...$15.99)
A nice little set by Sonny Stitt and Zoot Sims – recorded in Chicago after the two had played together at the Plugged Nickel in the Windy City! Backing is by the trio of pianist John Young – who gives the album a rolling bottom groove that shows off the Chicago sound of the early 60s ... LP, Vinyl record album