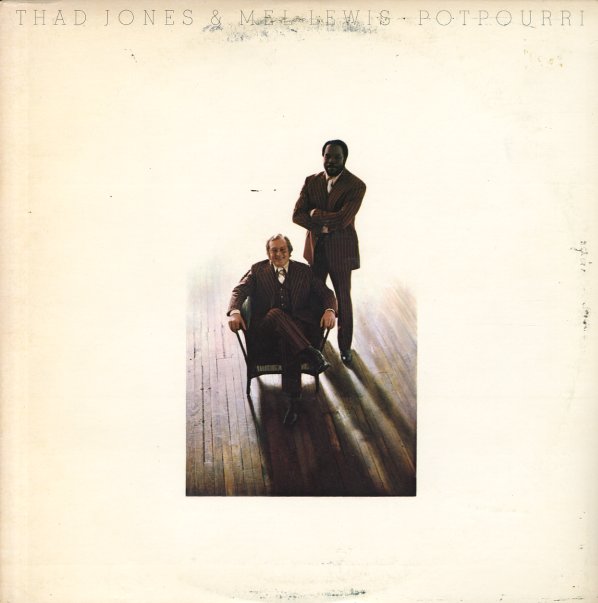 One of the hippest albums ever recorded by the Jones/Lewis band – oddly cut for Philadelphia International, during the height of that label's classic soul output! The group is totally great – filled with deeply soulful players like Ron Bridgewater, Cecil Bridgewater, Billy Harper, Roland Hanna, Jon Faddis, and George Mraz – and the tunes have a laidback feel that moves past the group's big band stylings, into a ream that includes some hipper mellow tracks – including a few with nice electric piano work. Quite soulful throughout – almost a Quincy Jones feel – and includes covers of "Don't You Worry Bout A Thing", "For The Love Of Money", and "Living For The City" – plus the originals "Yours & Mine", "Quiet Lady", "All My Yesterdays", and "Blues In A Minute".  © 1996-2022, Dusty Groove, Inc.
(Cover has light ring wear and some aging. Vinyl has short clicks on "Blues In A Minute" and "All My Yesterdays".)

Presenting Thad Jones, Mel Lewis & The Jazz Orchestra (original cover)
Solid State, 1966. Near Mint- Gatefold
LP...$11.99
One of the hippest large American ensembles of the late 60s – almost a US equivalent to the groovy sound of the Clark Boland Big Band over in Europe! Trumpeter Thad Jones and drummer Mel Lewis had already made some great music together on their own – but once they came together in a ... LP, Vinyl record album

New Life
Horizon, 1976. Near Mint- Gatefold
LP...$2.99
A wonderful start to the second decade of this ultra-hip group – an ensemble who started to reinvent the sound of the big band in the late 60s, then only picked up more and more energy once time went on! Thad Jones and Mel Lewis are a hell of a pair – not only great leaders for a ... LP, Vinyl record album

Suite For Pops
Horizon, 1975. Near Mint- Gatefold
LP...$14.99
Large group backings, with a bit of vocals from Dee Dee Bridgewater – and titles that include "Meetin Place", "The Summary", "The Farewell", "The Great One", and "Only For Now". LP, Vinyl record album

Thad Jones & Mel Lewis Live At The Village Vanguard
Solid State, 1967. Near Mint- Gatefold
LP...$6.99 (CD...$9.99)
One of the first albums in a long line of successes from the Thad Jones/Mel Lewis Orchestra – recorded live in their home turf at the Village Vanguard! The group at this point was a freshly-created outfit filled with some of the best large group jazz soloists of the time – players that ... LP, Vinyl record album

Presenting Thad Jones, Mel Lewis & The Jazz Orchestra
Solid State, Late 60s. Very Good+ Gatefold
LP...$4.99
One of the hippest large American ensembles of the late 60s – almost a US equivalent to the groovy sound of the Clark Boland Big Band over in Europe! Trumpeter Thad Jones and drummer Mel Lewis had already made some great music together on their own – but once they came together in a ... LP, Vinyl record album