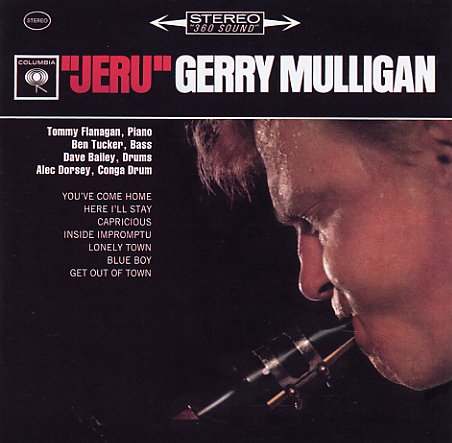 A pretty great little album – and very different than Gerry Mulligan's regular sides from the time! The session was originally produced as part of the sessions for the short-lived Jazztime label in the early 60s – and was produced by Dave Bailey with a soulful undercurrent that's quite similar to his own sessions from the period. Gerry's really shaking free of the "cool" cliches for the record – working with a deeply grooving rhythm section that includes Bailey on drums, Ben Tucker on bass, and Tommy Flanagan on piano – making a key return of piano to a Gerry Mulligan session! Alec Dorsey's also in the group on conga – adding a nice little extra kick to a few of the best tunes on the set – and Gerry himself is playing baritone with a style that's as fluid as on his freer-floating 50s recordings, but which also hits more of a rolling sort of tenor groove! Titles include "Get Out Of Town", "Blue Boy", "Capricious", "Here I'll Stay", and "Inside Impromptu".  © 1996-2022, Dusty Groove, Inc.
(Out of print, punch through barcode.)

Little Big Horn
GRP, 1983. Used
CD...$6.99
As close as Gerry Mulligan ever came to cutting an album of funky jazz – an electric-tinged set recorded with arrangements by Dave Grusin, who also plays electric piano on the set, which makes for an odd, but surprisingly pleasing contrast with Gerry's baritone. Tracks are long with smooth ... CD