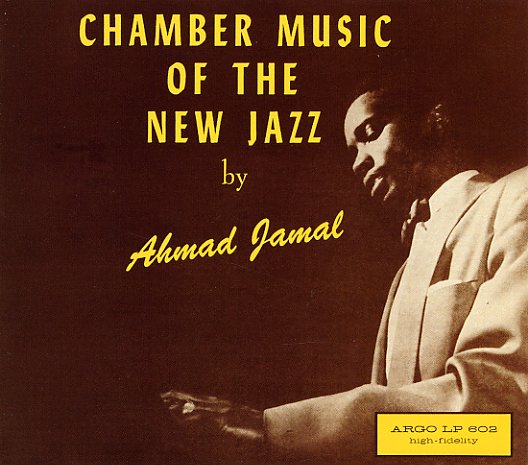 Chamber Music Of The New Jazz

Beautiful work from Jamal's early Chicago years – and a perfectly titled set that really gets at the differences he made in modern jazz! The tunes are wonderfully fluid, soulful, and swinging – but not in the gutbuckety style of other trios of the time, more in a lightly modern style that features almost equal interplay between Jamal's piano, the bass of Israel Crosby, and the guitar of the wonderful Ray Crawford – who really ads an amazing touch to the record. Tracks include the great original "New Rhumba", plus cool versions of "Jeff", "Darn That Dream", "Spring Is Here", and "All Of You".  © 1996-2021, Dusty Groove, Inc.
(Mono black label pressing with deep groove. Cover has small seam splits and some light stains on back.)

In Crowd
Argo, 1965. Very Good-
LP...$4.99
Easily one of the biggest selling jazz albums of the 60s – a crowning achievement for Ramsey Lewis and his popular trio with Eldee Young on bass and Redd Holt on drums! The set was recorded live at the Bohemian Caverns in DC, and the trio are perfect in the setting – going at the ... LP, Vinyl record album

Themes & Things
Argo, 1961. Very Good
LP...$8.99
A sweet trio set from the great John Young – a Chicago pianist in the same rising generation as Ramsey Lewis, but one with a much more lyrical vibe overall! This set feratures a trio with William Yancey on bass and Phillip Thomas on drums – recording for Chess with a nice lean vibe, on ... LP, Vinyl record album

Live At The Bijou
Kudu, 1977. Very Good+ 2LP Gatefold
LP...$9.99
A totally great Grover Washington record – and with 25 years behind us, we really now realize how fantastic all the early Kudu sessions really were! The record was recorded live at the Bijou, and is spread out over 2 long LPs, with lots of room for tasty open-ended solos by Grover and the ... LP, Vinyl record album