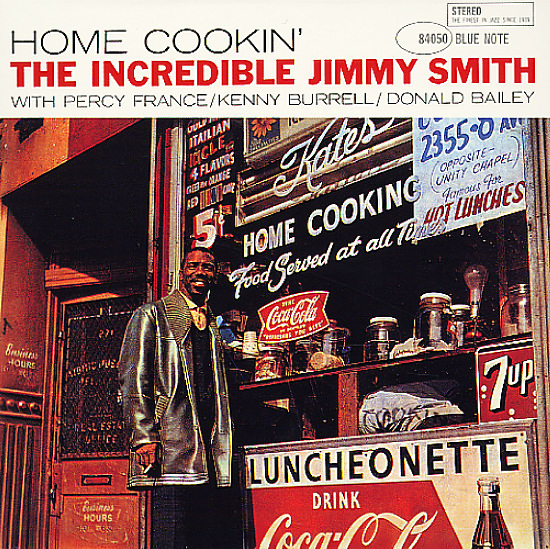 One of the key classics from the Jimmy Smith years at Blue Note Records – a really groundbreaking time for the Hammond organ in jazz, as Jimmy helped take it from backrooms in bars to center stage of jazz with a record like this! The album's about as iconic as you can get for Jimmy at the label – from the fantastic cover image, to the well-crafted tunes – many of which are shorter than some of Smith's earlier jam session-styled work, and help forge a bridge between soul jazz and the emerging soul instrumental sound of the early 60s. The album features some excellent work from the obscure Percy France on tenor on most of the tracks – a player we only know from a handful of dates – next to other quartet members who include Kenny Burrell on guitar and Donald Bailey on drums. Titles include "Sugar Hill", "I Got A Woman", "Motoring Along", "Gracie", and "Messin Around".CD features 5 previously unissued bonus tracks!  © 1996-2022, Dusty Groove, Inc.
(Out of print.)

At Club Baby Grand Vol 2 (Japanese pressing)
Blue Note, 1956. Used
CD...$6.99 (CD...$7.99)
Jimmy Smith heard in the kind of setting that spawned him – playing live at Delaware's Club Baby Grand – just the sort of smoky little jazz room that initially fostered his talents! The liveness of the set brings a really nice edge to the album – a sound that's grittier than some ... CD

Jimmy Smith At The Organ – The Incredible Jimmy Smith Vol 3 (Japanese pressing)
Blue Note (Japan), 1956. Used
CD...$14.99 18.99 (LP...$49.99)
A real stormer from Jimmy Smith – done in his first year at Blue Note, but with a sense of power and imagination that cannot be denied! It might be easy to pass up this album, because many of the tunes are standards, done in a simple trio format – but back at the time of this session, ... CD

Open House/Plain Talk
Blue Note, Late 60s. Used
CD...$9.99
Material that was recorded in the early 60s, but not issued by Blue Note until later in the decade – when they were pulling out any Jimmy Smith session they had, in order to compete with the bigger hits on Verve. The record features 8 extended tracks, with an all-star jam session lineup that ... CD

Prayer Meetin'
Blue Note, Early 60s. Used
CD...$6.99 8.99
A classic Blue Note meeting of two of the label's top talents in the early 60s – Hammond hero Jimmy Smith, and the up-and-rising Stanley Turrentine on tenor! Turrentine's simply great at this point – playing with a raspy edge on the bottom of his tone, sounding dark and mysterious ... CD