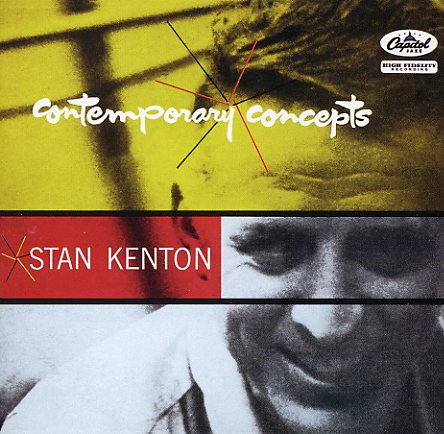 Contemporary concepts that are as bold today as they were when first released in the mid 50s! Stan's at the height of his powers here – working with the brilliant Bill Holman to craft some incredible versions of tunes that had become jazz standards, tired ones at that – but which explode into new colors and tones in the hands of the Kenton magic! Titles include sublime readings of "What's New", "Stella By Starlight", "Yesterdays", "Cherokee", and "I've Got You Under My Skin" – and the CD features bonus material that includes "Opus In Chartreuse", "Opus In Turquoise", "Opus In Beige", and "Sunset Tower" – most of which were arranged by Gene Roland, and are even more modern than some of the other material.  © 1996-2021, Dusty Groove, Inc.
(Out of print.)

Romantic Approach/Sophisticated Approach
Capitol/EMI (UK), 1961/1962. Used
CD...$8.99
Beautiful beautiful work from Stan Kenton – 2 albums that both apply the dark tones of his arranging style to a range of popular numbers that end up completely transformed! The Romantic Approach has Stan working with some unusual instrumentation that features the Kenton-designed "melloph ... CD

Sophisticated Approach (plus bonus tracks)
Capitol, 1961. Used
CD...$7.99
A great set by Stan Kenton – one that applies the dark tones of his style to a range of popular numbers that end up completely transformed! The album features some wonderful charts from arranger Lennie Niehaus – emerging here as one of the more complicated talents of the west coast ... CD

Standards In Silhouette
Capitol, 1959. Used
CD...$7.99 (LP...$1.99)
Late Kenton on Capitol – but great Kenton too! In a way, Stan was almost best when he was working with standards – as on a set like this, he has an incredible way of transforming the sound of familiar numbers into something dark, moody, and modern. It's amazing to hear the way he ... CD

Complete Capitol Recordings Of Gene Krupa & Harry James (7CD set)
Capitol/Mosaic, Mid 40s/Mid 50s. Used 7CDs
CD...$119.99
A very cool package – featuring lots of non-LP material, and some rare tracks too! The Gene Krupa sessions are all from the mid 40s for Capitol – and the Harry James are from that great mid 50s time when he was really reinventing his sound! CD