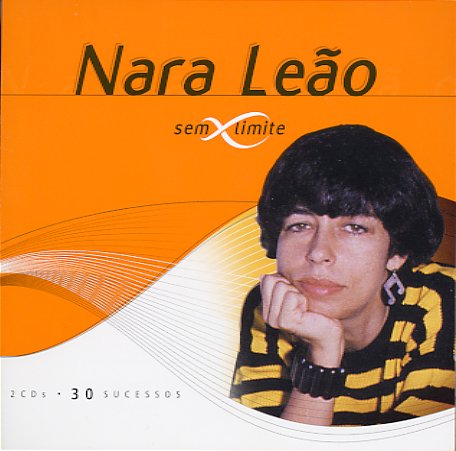 From the bossa years, to the Tropicalia generation, to the MPB hit days of the 70s, and even up into the 80s – Nara Leao has always been one of Brazil's most compelling singers, as you'll hear on this well-selected batch of 30 tracks pulled from her classic recordings for Philips and Elenco. The package includes many hard to find numbers, and it's a great overview of Nara's work with a strong focus on the early days. Titles include "Carcara", "A Rita", "A Banda", "Amor Nas Estrelas", "Camisa Amarela", "Telefone", "Diz Que Fui Por Ai", "Cantores De Radio", "Wave", "Opinao", "Lindoneia", and "Com Acucar, Com Afeto".  © 1996-2022, Dusty Groove, Inc.
(Out of print.)

Meus Sonhos Dourados
Philips (Japan), 1987. Used
CD...$9.99 11.99
A great one from Nara Leao's "back to bossa" years in the late 80s – a set that has the lovely vocalist working through older American standards – but done here with new lyrics in Portuguese and some great bossa backings from Roberto Menescal! Menescal's airy style proved to ... CD

Os Meus Amigos Sao Um Barato
Mercury (Japan), 1977. Used
CD...$14.99 19.99
A wonderful album from Nara Leao – and one that features her singing duets with some of the greatest talents of the bossa era and beyond – an amazing lineup that includes Tom Jobim, Caetano Veloso, Gilberto Gil, Edu Lobo, Joao Donato, Carlos Lyra, and others! The sound is wonderful ... CD

Garota De Ipanema
Philips (Brazil), 1989. Used
CD...$9.99
A beautifully understated album from the legendary Nara Leao – done as a tribute to the bossa generation, with key help from the great Roberto Menescal – who handles the arrangements, plays guitar behind Nara's lovely vocals! Given that Nara's groundbreaking work of the late 60s was ... CD

Sacundin Ben Samba
Universal (Brazil), 1964. Used
CD...$11.99 (LP...$34.99)
One of Jorge Ben's greatest albums – a groundbreaking blend of samba and soul that forever went onto transform the face of Brazilian music! The record works off the groove set down by Jorge's earlier hit "Mas Que Nada" (which appears on another LP), and takes the blend of bossa, ... CD