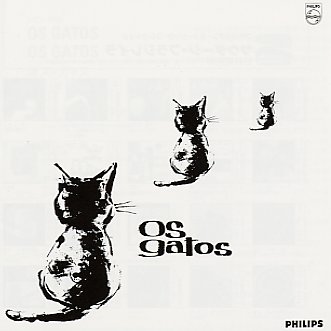 An album of incomparable beauty – one of the two rare albums cut by this legendary group during the 60s, and a bossa nova masterpiece all the way through! The work is guided by a young Deodato – who's moving here into much more complicated territory than his early organ jazz records – a spacious sort of sound that really marks him as one of the most inventive talents of the mid 60s bossa era! The arrangements are light, and spacious – and leave plenty of room for individual voices to float through the mix – including key piano, saxophone, or trombone passages, plus some occasional harmony vocals – which resonate with the force of work by Tamba Trio at times. The whole thing's fantastic – and titles include "Nuvens", "Sambidu", "A Chuva", "O Show E O Meu Rio", "Novo Sol", and "Razao De Viver".  © 1996-2022, Dusty Groove, Inc.
(2002 Japanese pressing, includes obi.)

Aquele Som Dos Gatos
Mercury (Brazil), 1965. Used
CD...$11.99
One of the most legendary groups from the bossa era in Brazil – a combo of incredible players, working with sublime arrangements by Eumir Deodato – all in a sound that hardly been matched again! The group only ever recorded two albums, but they've had a lasting impact on the sound of ... CD