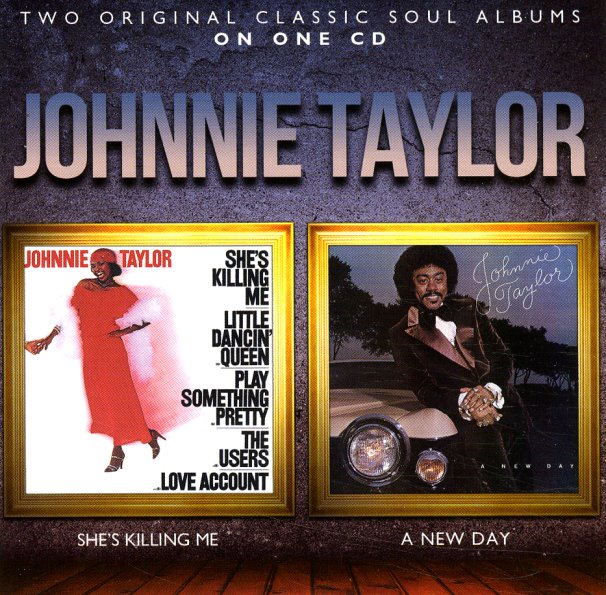 Pure greatness from Johnnie Taylor – two Columbia Records releases back to back on a single CD! First up is She's Killing Me, an obscure 7 track EP from Johnnie Taylor – almost a 12" single, but with more than enough going on to make us think of it as a full album! Johnnie's in prime Columbia Records form here – and the tunes are a mix of the "Disco Lady" style of his earlier hit for the label, plus some of the mellower southern soul of his roots! The set was recorded in both Detroit and Muscle Shoals – with Don Davis at the helm in the former, and Brad Shapiro in the latter – both of whom really help Taylor hit the heights with effortless ease here, all in a new sense of sophistication that he might never have found in his music, had he stayed at Stax! Titles include "She's Killing Me", "Pulling The Train", "I Can't Leave Your Love Alone", "Play Something Pretty", "The Users", and "Love Account". A New Day is massive, massive music from the great Johnnie Taylor – a set that's way beyond his early work on Stax, and even his disco hits of the 70s – but in a way that's even better than before! The album makes use of two great producers – Brad Shapiro for side one, and Don Davis for side two – both talents who have this way of mixing Taylor's deep soul vocals with some warmer modern soul modes – but at a level that moves way beyond cliche or commercial modes – with Johnnie as equally captivating on the mellow cuts as he is on the ballads. In a world where so many collectors are always digging for these completely obscure indie sides from the time, folks would do well to take note that the real gems are often on major labels like this – just lost in the shuffle next to the artists bigger hits. Titles include "Syliva", "Sneakin Sneakin", "I Wanna Get Into You", "I'd Rather Hurt Myself", and "The Heart Break Kid".  © 1996-2021, Dusty Groove, Inc.