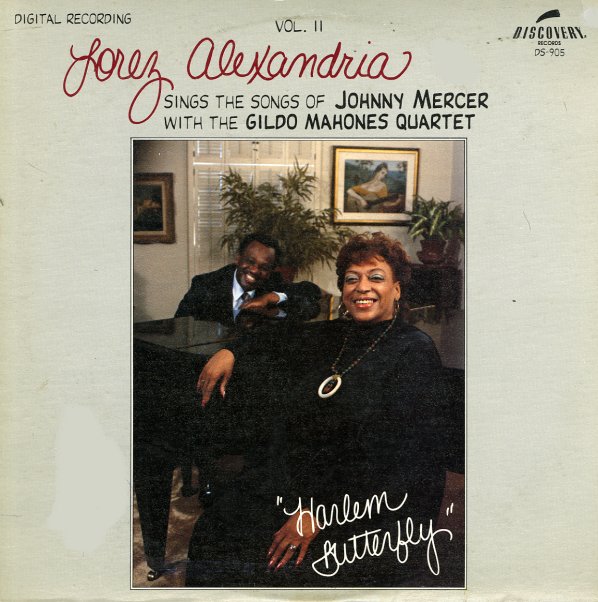 Another soulful set of jazz standards that pairs the great Lorez with a group led by Gildo Mahones. Gildo's always been one of the best piano players we've heard accompaning a vocalist, and his work with Lambert, Hendricks, & Ross is the stuff of legends. This group has the added benefit of good tenor work by Herman Riley, and the band swings well with Lorez as she soulfully makes her way through tracks like "Mandy Is Two", "Skylark", "Harlem Butterfly", and "P.S. I Love You".  © 1996-2022, Dusty Groove, Inc.
(Cover has light wear and a 'grammy nominee' sticker.)

How Will I Remember You? (portrait cover)
Discovery, 1977. Very Good+
LP...$14.99
A great album from the late 70's, featuring the excellent jazz vocalist backed by a totally tight group led by Gildo Mahones. The sound is deep and loud, and there's some nice phat bass on here, particularly on the intro to "Baltimore Oriole", which has a nice break sound at the ... LP, Vinyl record album

Tangerine – Lorez Alexandria Sings The Songs Of Johnny Mercer Vol III
Discovery, 1985. Very Good+
LP...$11.99
The 3rd in Lorez's excellent series of albums dedicated to the songs of Johnny Mercer – and like previous volumes, recorded with some very soulful backing from the Gildo Mahones quartet! Gildo brings a gentle swing to the tracks that lets Lorez sing in a free and open range – one that ... LP, Vinyl record album

In The Blue Of The Evening
Discovery, 1978. Very Good+
LP...$6.99
Arranged and conducted by Johnny Mandel. LP, Vinyl record album

Chen Yu Lips
Discovery, 1982. Very Good+
LP...$9.99
A sweet and jazzy set of vocals – recorded in LA with a really wonderful finish! Feather are the team of Weaver Copeland and Mahmu Pearl, and they sing together with a style that's a lot like the hippest work of Jackie & Roy or the team of Dave MacKay & Vicki Hamilton – breezy, ... LP, Vinyl record album