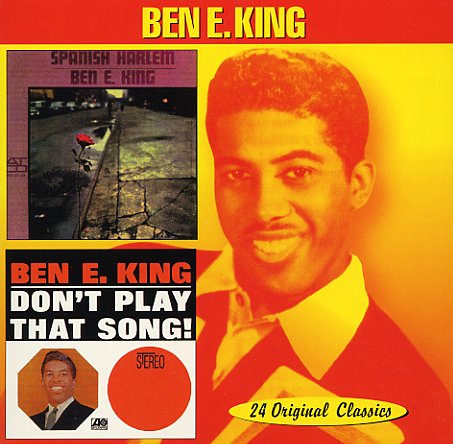 2 albums' worth of incredible work from Ben E King! Spanish Harlem is a classic – and forget that you've heard the title track a million times, because the album's a treasure all the way through – packed with beautiful tunes arranged and produced by the Lieber-Stoller tune, in that mix of baion rhythms that they were crafting in the uptown studios for the Drifters during the early 60s. The leadoff cut is the amazing "Amor", a lightly grooving number that should have been massive – and just about every other cut is a similar Latin-tinged number. Titles include "Come Closer To Me", "Sway", "Love Me, Love Me", "Frenesi", "Souvenir Of Mexico", and "Besame Mucho". Don't Play That Song is equally great – with some darker numbers done in Ben's increasingly uptown soul style. Titles include classics like "Here Comes The Night", "Don't Play That Song", "Young Boy Blues", and "Stand By Me" – plus lesser-known gems like "Brace Yourself", "I Promise Love", "Yes", "First Taste Of Love", and "Show Me The Way".  © 1996-2021, Dusty Groove, Inc.