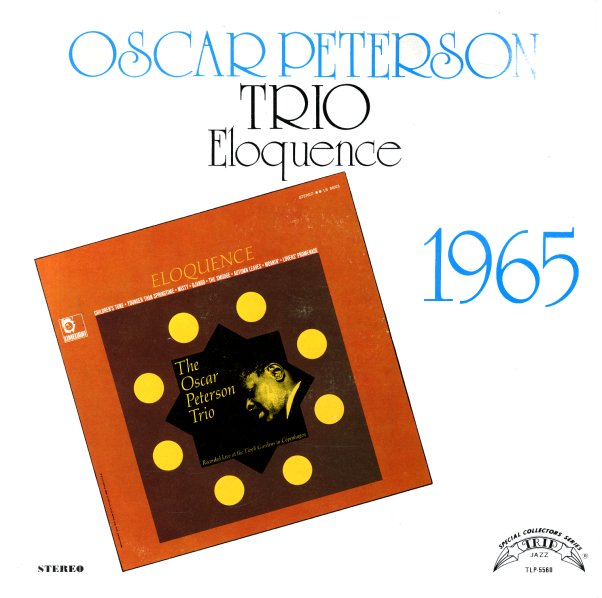 A sprightly mid 60s session from the Oscar Peterson Trio – one of the last live recordings from the famous lineup that featured Ray Brown on bass and Ed Thigpen on drums! The performance was captured at the Tivoli Gardens, in Copenhagen – and recorded in an open style that really gets at the easy-going and fluid feel of the trio at the time. Peterson steps out front on piano on many numbers – starting with thoughtful introductions before the bass and drums come in – and titles include "Children's Tune", "Younger Than Springtime", "Lover's Promenade", "Moanin", and "The Smudge".  © 1996-2020, Dusty Groove, Inc.
(Trip reissue. Cover has a cutout hole.)

Oscar Peterson Trio At The Stratford Shakespearean Festival
Verve, 1956. Very Good
LP...$11.99 (CD...$9.99)
A near-lost gem in Oscar Peterson's mid-50s catalog for Verve – and a sparkling set of trio numbers recorded at the Shakespeare Festival in Ontario! Despite the literate setting of the recording, the work's never stuffy or academic – and Peterson swings things mightily with his trio ... LP, Vinyl record album

Bucket O' Grease
Limelight, Late 60s. Near Mint-
LP...$14.99
A killer little set from Les McCann – one of his greatest records of the 60s, thanks to a fair bit of Latin Soul influences! The album's got a groove that's much grittier than Les' other work – a solid, soulful emphasis on bottom rhythms – which are mostly in a boogaloo and shing- ... LP, Vinyl record album