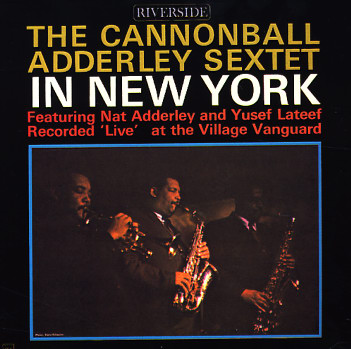 Rock-solid live material from the classic Cannonball Adderley Sextet – a combo who could usually groove even better on a concert date then they could in the studio! The album's one of a number of key live sides from Cannon in the 60s – and although it pre-dates his work on Capitol, it's done in a similar spacious mode – with plenty of longish tracks that build upon the core groove set down by Joe Zawinul's piano, Sam Jones' bass, and Louis Hayes' drums – a perfect backdrop for the creative and complicated solos of Cannon on alto, Nat Adderley on cornet, and Yusef Lateef on tenor, flute, and oboe! The date was recorded live at the Village Vanguard in 1962 – and titles include "Gemini", "Planet Earth", "Dizzy's Business", "Syn-anthesia", "Scotch & Water", and "Cannon's Theme".  © 1996-2021, Dusty Groove, Inc.
(Japanese Victor pressing, with insert – SMJ 6108. Vinyl has a short click in one spot, but is nice and clean overall.)