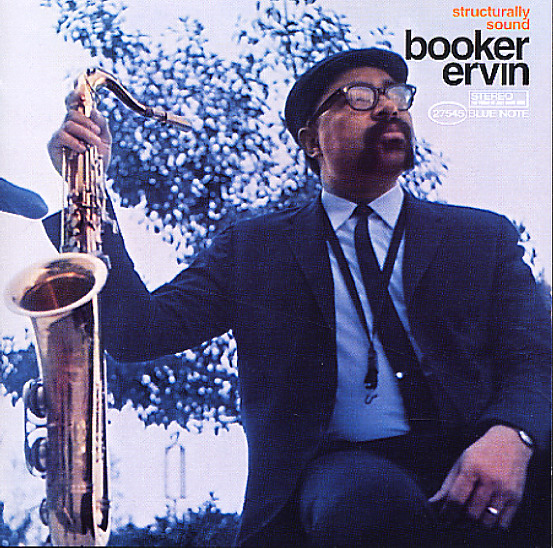 Also available
Booker Ervin — Structurally Sound ... CD 22.99
Booker Ervin — Structurally Sound (with bonus tracks) ... CD 12.99
One of Booker Ervin's last sessions – quite different than some of his earlier work, and a great indication of the way that he was stretching his style in the years before his untimely death. The group's a committed band of modernists, and includes a young Charles Tolliver on trumpet, plus John Hicks on piano and Lennie McBrownie on drums. The tracks are short, but they're a compelling mix of Booker's searching tenor lines with warm lyrical accompaniment. Titles include "Boo's Blues", "Franess", "Stolen Moments", "Berkshire Blues", and a great reading of "Dancing In The Dark".  © 1996-2022, Dusty Groove, Inc.
(Cover has light wear & aging, with some light drink cup stain spots, faint stain on the back.)

Big Swing Face (80s pressing)
Pacific Jazz, Late 60s. Near Mint-
LP...$4.99
Fantastic work from the legendary Buddy Rich – one of his Pacific Jazz albums from that stretch when Buddy was opening up his bag, and getting very groovy in his music! The album's a live one – and as with the rest from the decade, really has the Buddy Rich sound moving forward, thanks ... LP, Vinyl record album

Saxophone Artistry Of Bud Shank – Bob Brookmeyer/Strings & Trombones
Pacific Jazz, 1955. Very Good-
LP...$6.99
Really beautiful work from Bud Shank – the kind of set that showed everyone very early that he was way more than just a typical reedman! The set's divided up into two sweet variations – side one a small combo date with Bob Brookmeyer on trombone and a bit of strings to warm things up ... LP, Vinyl record album

Wild – The Big Big Sound Of Larry Wild Wrice
Pacific Jazz, Early 60s. Near Mint-
LP...$29.99
The only album we've ever seen from jazz drummer Larry Wrice – a Chicago player who really kicks it in a hard and heavy soul jazz groove! Larry's got an approach to the kit that's quite a lot like that of Joe Dukes – one that's always concerned with pushing the rhythms of the tune very ... LP, Vinyl record album

Bud Shank Quartet
Pacific Jazz, 1956. Near Mint-
LP...$38.99
Wonderful early work from reedman Bud Shank – one of the most lyrically expressive players on the LA scene of the 50s, and one who often disappeared into larger groups in the following decade! Here, though, Bud's nicely out front – blowing alto and a bit of flute, in his own tight ... LP, Vinyl record album

Blues Message
Pacific Jazz, 1960. Very Good
LP...$34.99
A really wonderful session from the west coast scene – and one that marks a real change in styles as the 60s moved in! The vibe here is very different than the cool jazz of 50s releases on the Pacific Jazz label – as the great Texas tenor Curtis Amy is in the lead, working alongside ... LP, Vinyl record album

Love Lifted Me
Pacific Jazz, 1962. Very Good+
LP...$38.99
A tremendous early album from drummer Ron Jefferson – a key player in the LA scene of the early 60s, and an artist who only cut a rare few sides! The album's wonderful for so many reasons – not the least of which is its lineup, which includes a young Bobby Hutcherson on vibes, Frank ... LP, Vinyl record album

Freddie Gambrell With Ben Tucker, Bass
Pacific Jazz, 1958. Near Mint-
LP...$24.99
Quite an obscure little session – especially for the Pacific Jazz label, who mostly worked with some of the bigger names on the west coast scene! Pianist Freddie Gambrell is a player we only know from this one rare album – but it's quite a gem, and is cut in an unusual format that ... LP, Vinyl record album

Les McCann Ltd In New York (80s pressing)
Pacific Jazz/Liberty, 1961. Very Good+
LP...$6.99
A killer live set by Les McCann – a rare 60s outing that moves past his more familiar trio format, and adds some horn players to the mix! The change is wonderful – as the set features work from Blue Mitchell on trumpet, and both Stanley Turrentine and Frank Haines on tenor – ... LP, Vinyl record album

Freedom Sound
Pacific Jazz, 1961. Very Good
LP...$11.99 19.99
Sublime early soul jazz from the Jazz Crusaders – a seminal set that really has the group taking off right away! The use of "freedom" in the title is well placed – as the set definitely shows the players stretching out a bit on their solos – hinting at the magic that ... LP, Vinyl record album

Rajah
Blue Note, 1966/1984. Very Good+
LP...$39.99
One of our favorite albums ever from the legendary trumpeter Lee Morgan – a set that Blue Note recorded in the mid 60s, but didn't show the world until almost two decades later! The album's got Lee as his lyrical best – working almost with a sense of exoticism, especially on the ... LP, Vinyl record album