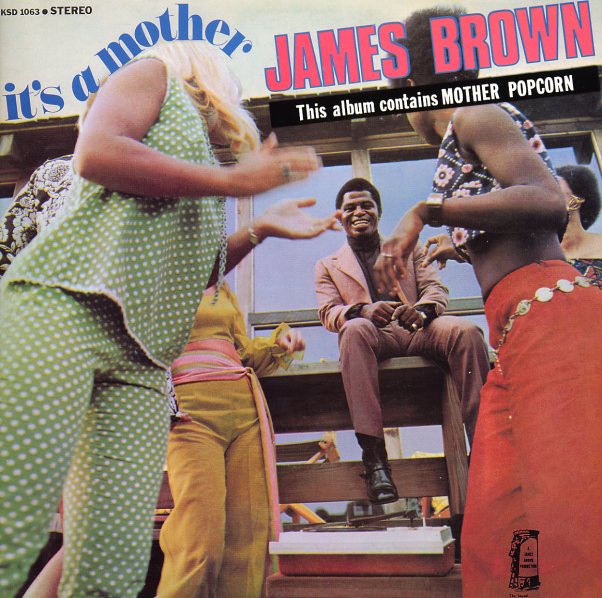 A definite mother from James Brown – the kind of all-funky album that few of his contemporaries could ever hope to match! If you've ever doubted the sheer raw power of James at the end of the 60s, the first few notes of this one will definitely make you a convert – and the stretched-out grooves as the album rolls on will pull you even further into the fold. Most tracks roll on with that improvised studio jamming style that James was hitting at the time – a pre-JBs mode that's not as long as later years, but which still makes you feel that there probably was plenty more recorded on the dates that didn't make it into the two-part versions of the tracks! And although James is singing on most numbers, the real focus is more on the band – hitting hard, vamping sharp, and grooving massively under shouted calls and directions from Brown. Titles include two great instrumentals – "Popcorn With a Feeling" and "Top of the Stack" – plus "Little Groove Maker Me (parts 1 & 2)", "Mother Popcorn (parts 1 & 2)", "Mashed Potato Popcorn (parts 1 & 2)", "Any Day Now", "You're Still Out Of Sight", and "I'm Shook" – as well as the great mellower number "If I Ruled The World" – redone here as an African-American anthem of pride and power!  © 1996-2021, Dusty Groove, Inc.
(Original orange and black label pressing. Cover has some wear and aging on the back and a name in pen on the front and labels.)

Sho Is Funky Down Here
King, 1971. Very Good
LP...$44.99
A legendary bit of fuzzy funk from James Brown – an important collaboration with the mighty Dave Matthews, who brings a more tripped-out feel to the record than some of James' other King sessions of the time! Matthews adds in lots of psych-influenced guitar – used very different than ... LP, Vinyl record album

Handful Of Soul
Smash, 1966. Very Good+
LP...$34.99
One of the best of Brother James' instrumental records for Smash, and a record that has him out front, wailing at the organ. While James has never been one of the true virtuosos of the instrument, he plays with a sense of style and adventure that make his best LPs sing with energy. This one's got ... LP, Vinyl record album

Ain't It Funky
King, 1970. Very Good-
LP...$19.99 (CD...$13.99)
A killer from James Brown – and one of his best instrumental albums of the King years! The record has James working with the pre-JBs James Brown Band – a tight assemblage of players who really know how to craft an off-kilter groove. The guitar's popping on the beat here as much as the ... LP, Vinyl record album