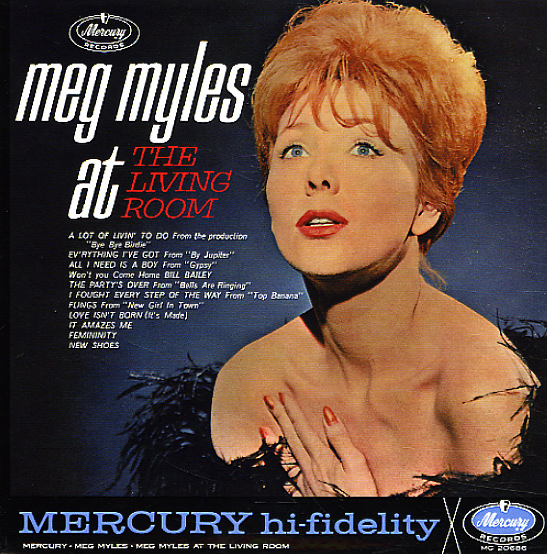 Meg Myles At The Living Room

A sexy little set from singer Meg Myles – recorded live before a very adult nightclub crowd – with a great set of tunes to match! The record's got a lot more energy than Meg's previous material from the 50s – and Myles really has a way of swinging things with a sensual sort of punch – that new mode for the 60s that was put forth most strongly by Peggy Lee, and maybe a few other singers like Marian Montgomery! The backings are by a small combo, and really fit the mood well – and even though there's no dialogue between the tunes, the record really gives you a strong sense of Meg's presence on the club. Titles include "Flings", "New Shoes", "Everything I've Got", "It Amazes Me", "Femininity", and "Love Isn't Born It's Made".  © 1996-2021, Dusty Groove, Inc.
(Black label stereo pressing with deep groove. Cover has bumped corners at the bottom.)

This Is My Story
Mercury, Late 50s/1961. Very Good- 2LP Gatefold
LP...$4.99
A cool compilation that features one album of new recordings of older Dinah Washington hits – done in 1961 with backings by Quincy Jones – and another record that features some of Dinah's best bits for Mercury from the late 50s and early 60s! LP, Vinyl record album

Wonderful World Of Make Believe
Mercury, 1964. Near Mint-
LP...$4.99
An album for Mercury that features Mathis working with arranger Allyn Ferguson – who often gives Johnny the same sort of shimmering charts he might get from Glenn Osser, but who takes a bit more liberties here with the "make believe" modes promised in the title! Lots of the tunes ... LP, Vinyl record album