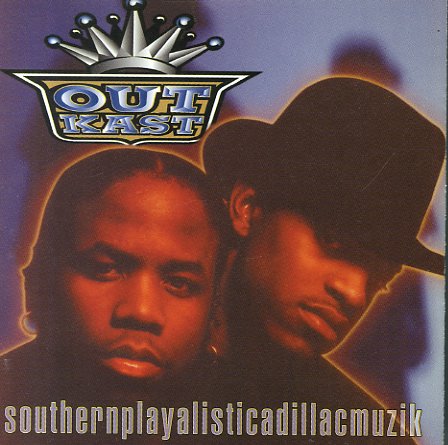 The mid 90s instant classic! Outkast's debut set hem up as one of the most distinctive hip hop duos ever, right out of the gate, but it also helped to established the freewheeling, funky dirty south sound, thanks to genius Organized Noize production! The Outkast sound would get bigger and more wildly eclectic on the records to follow Southernplayalisticadillacmuzik, but the consistent, funky southern swagger on this one holds up incredibly well. It sounds fresh to this day! Includes breakout hit "Player's Ball", "Crumblin Erb", "Git Up, Git Out", "Claimin' True", "Funky Ride", "Soouthernplayalisticadillacmuzik", "Ain't No Thang", "CallOf Da Wild", "Hootie Hoo" and a couple of interludes.  © 1996-2022, Dusty Groove, Inc.
(20th Anniversary pressing.)