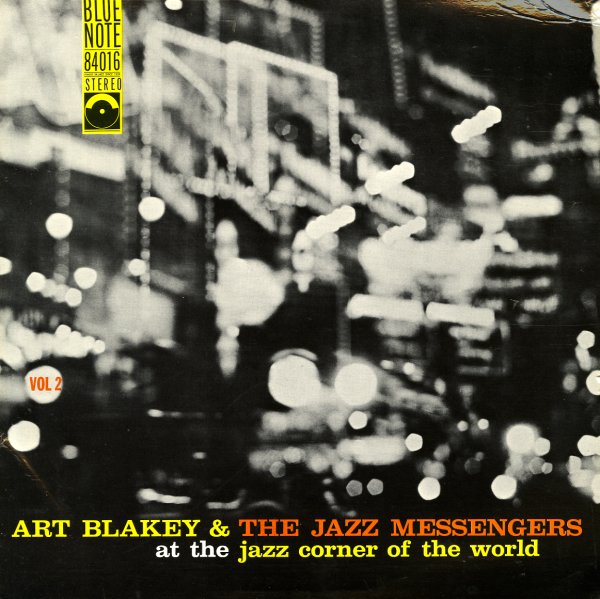 Smoking live material from Art Blakey and the Jazz Messengers – a set recorded at Birdland, aka The Jazz Corner Of The World – home to a number of key performances by the group! The lineup here features a key transitional version of the group – with the younger Lee Morgan on trumpet and Bobby Timmons on piano, already setting the combo on fire with their new ideas and very bold work on solos – and the great Hank Mobley on tenor, who'd worked with Blakey for a few years at this time – and provides this deeply soulful grounding that's as great as his own records, but maybe even a bit more open in the live setting. The great Jymie Merritt is on bass – one of Art's secret weapons over the years – and the set list of this second volume includes "Chicken & Dumplins", "M & M", "Art's Revelation", and a great version of "Hi Fly".  © 1996-2022, Dusty Groove, Inc.
(70s white b label pressing.)

Night At Birdland Vol 2
Blue Note, Late 50s. Very Good+
LP...$29.99
A wonderfully hard-storming set – and a record that not only firmly put the Jazz Messengers on the map, but also set a whole new standard for live jazz recording! The group here is the early version of the Messengers – almost co-led by drummer Art Blakey with pianist Horace Silver ... LP, Vinyl record album

Buhaina's Delight
Blue Note, 1961. Very Good+
LP...$44.99 (LP...$25.99)
A landmark recording by a whole new chapter in Art Blakey's career! During the early 60s, Blakey expanded the Jazz Messengers from a quintet to an incredibly tight sextet – adding in the trombone of Curtis Fuller for an extra-punched up frontline that also included Freddie Hubbard on trumpet ... LP, Vinyl record album