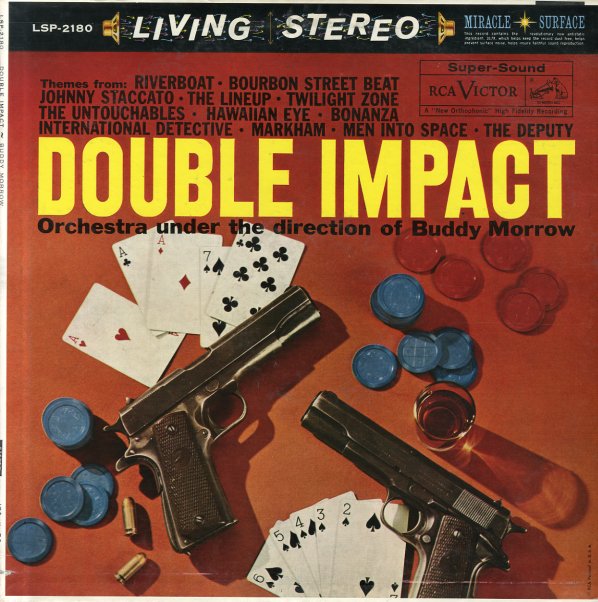 Second set of swinging tracks, very much in the same vein as Buddy Morrow's crime jazz soundtracks cut for RCA at the end of the 50s! More great TV themes from the time, running the gamut from action and thriller series to westerns and dramas, including "Men Into space", "Staccato's theme", "The Deputy", "Bourbon Street Beat", "Bonanza", "Twilight Zone", 'San Francisco Blues" and "The Untouchables".  © 1996-2021, Dusty Groove, Inc.
(Mono pressing with deep groove. Cover has some splitting on the top seam.)

Poe For Moderns
RCA, 1960. Very Good+
LP...$2.99
Although Buddy Morrow's best known for his more crime-jazz and Night Train jazz work, this album's got him sounding surprisingly great in a set of tracks dedicated to the work of Edgar Allen Poe! The feel of the music shifts wildly from track to track – with a few that feature Keith McKenna ... LP, Vinyl record album

Music Goes Round and Round
RCA, 1961. Very Good+
LP...$7.99
This is Leo Addeo's entry into the "Stereo Action" RCA series, and is housed in a perfectly preserved white die-cut sleeve with a vivid spirograph type drawing showing through the hole. LP, Vinyl record album

Divine Hair Mass In F
Revelation/RCA, 1971. Very Good+ Gatefold
LP...$5.99
A very very weird version of "Hair", rewritten as a mass, and performed in a church by the original cast, plus a priest, organist, and everything else that you might throw in if you were going to do it this way. The album's got all the tracks from the score – like "1000 Year ... LP, Vinyl record album