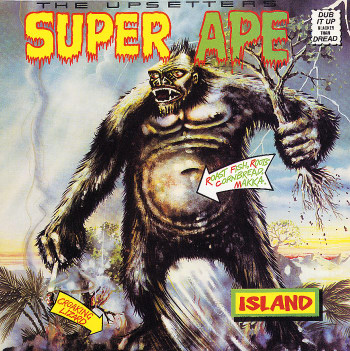 The King Kong of dub albums, and we're not just saying that because of the freaky deaky cover image of a super ape with a belly full of roast fish, cornbread and makka stepping on a croaking lizard with a tree in one hand and a "tree" in the other! Classic Lee Perry and an essential dub album, rendering Scratch's dense, multi-layered Black Ark rhythms in all their raw glory, with toasts and vocal snippets darting in and out of the dubs courtesy Prince Jazzbo, the Heptones, Dillinger and Scratch himself. With 10 essential tracks from the original release: "Zion's Blood", "Croaking Lizard", "Dread Lion", "Patience", "Dub Along", "Black Vest", "Underground", "Curly Dub" "Three In One" and "Super Ape".  © 1996-2021, Dusty Groove, Inc.