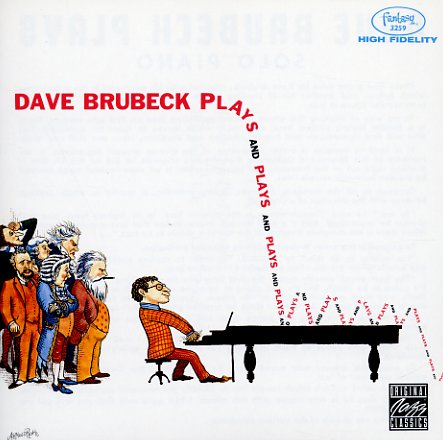 Dave Brubeck plays and plays and plays – but not in the repetitive way you'd guess from the title, given that this solo album is easily one of his most inventive from the Fantasy years! Solo styles aren't usually what we'd expect from Brubeck at this point, but Dave handles them very well – and sometimes with a lot more warmth than some of the music by his famous quartet! There's a nice sense of historicity in his playing here – proof that Brubeck wasn't always such an arch modernist, even though there's plenty of modern moments that leap out nicely, even among familiar tunes. More than anything, though, it's great to hear Dave really stretch out on the keys – with this fluid, relaxed approach that's really beautiful. Titles include "Imagination", "Sweet Cleo Brown", "Indian Summer", "I'm Old Fashioned", "Love Is Here To Stay", and "In Search Of A Time". CD features the bonus track "Two Sleepy People".  © 1996-2022, Dusty Groove, Inc.
(Out of print, booklet has a light crease.)