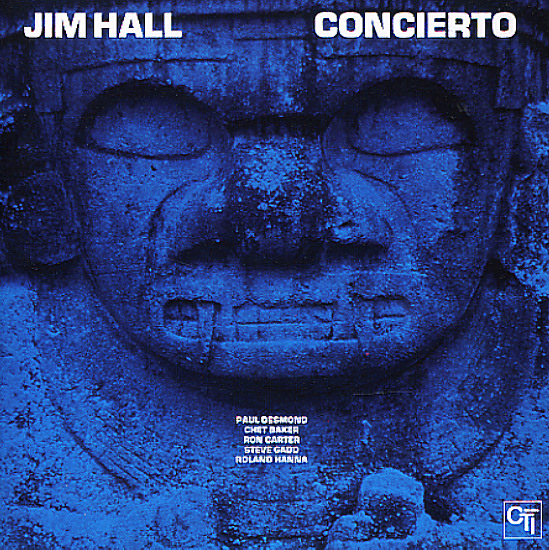 One of Jim Hall's most compelling albums from the 70s – a mix of lightly swinging tunes and more complicated numbers, recorded with some of his best partners from earlier years! Chet Baker is on trumpet, Paul Desmond is on alto sax – and the rest of the group includes Ron Carter bass, Roland Hanna piano, and Steve Gadd on drums. Hall's style is as airy and free-floating as ever – and the spacious arrangements on the album by Don Sebesky only support his work even more. The centerpiece of the album is the 19 minute long "Concierto De Aranjuez", and other tracks include "The Answer Is Yes", "Two's Blues", and "You'd Be So Nice To Come Home To".  © 1996-2022, Dusty Groove, Inc.
(Late 70s series 8000 reissue pressing, in a non-gatefold 'yellow' cover.)

Jazz Guitar
Pacific Jazz, 1957. Very Good
LP...$24.99
A rare early trio set from Jim Hall – especially noteworthy because Jim rarely worked in the format as a leader! The album's got Hall working with Carl Perkins on piano and Red Mitchell on bass – in a mode that slightly recalls some of Barney Kessel's mid 50s recordings over at ... LP, Vinyl record album