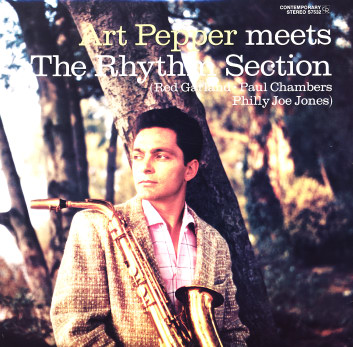 Also available
Art Pepper — Art Pepper Meets The Rhythm Section ... LP 34.99
One of Art Pepper's classic recordings, in which he plays with a spare quartet backing by Miles Davis' rhythm section at the time – Paul Chambers, Red Garland, and Philly Joe Jones. An essential East meets West jazz recording, with Art at the top of his game, playing in a unique setting for the first and only time (it's said that Art didn't even know of the date until the morning of the session). Pepper is one of the few alto players to really establish his own voice on the horn, without aping Bird, and his emotive playing really shines here. A definitive version of "Straight Life" is on this album, along with "Waltz Me Blues", "You'd Be So Nice To Come Home To", and "Star Eyes".  © 1996-2022, Dusty Groove, Inc.
(OJC Remasters pressing.)