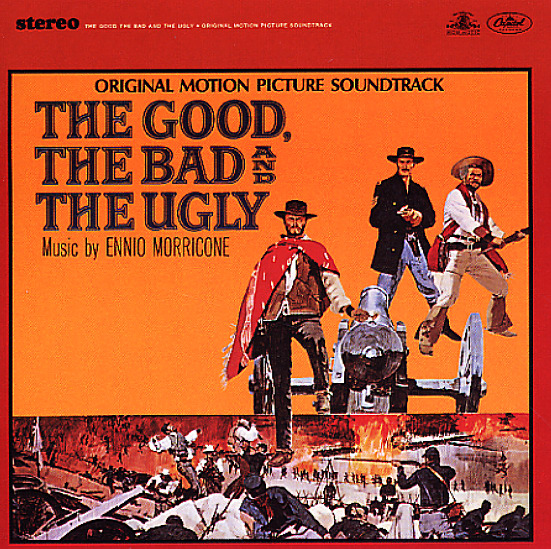 The Good, The Bad, & The Ugly (remastered & expanded with bonus tracks)

One of the first big moments of global fame for the legendary Ennio Morricone – and a record that still stands as one of his landmark albums all these many years later! The set's famous for its haunting theme – that "wah-wah-wah" melody that led to countless covers and samples over the years – but the whole thing's a lot more complex than just that tune – with lots of the same sense of space and brooding that Morricone brought to his music for Once Upon A Time In The West – with careful use of key instruments on a track by track basis, and these floating lines that almost signaled a whole new way of recording music for a film soundtrack. And yes, there's certainly key western elements like guitar or harmonica – but maybe more striking are all the points at which these obvious tropes disappear – to leave us with those really unique Morricone sounds that go way beyond music! Titles include "Insequimento", "Il Deserto", "Il Bandito Monco", "Fine Di Una Spia", "Marcetta", "Padre Ramirez", and "La Carrozza Dei Fantasmi".  © 1996-2022, Dusty Groove, Inc.

Two Mules For Sister Sara (2CD expanded edition)
Kapp/La La Land, 1970. Used
CD...$24.99
A really fantastic score from Ennio Morricone – maybe better this time around than the images on the screen for some of his other westerns of the period – more proof that the maestro was always willing to rise above, and give his best no matter what the setting! The music begins with ... CD