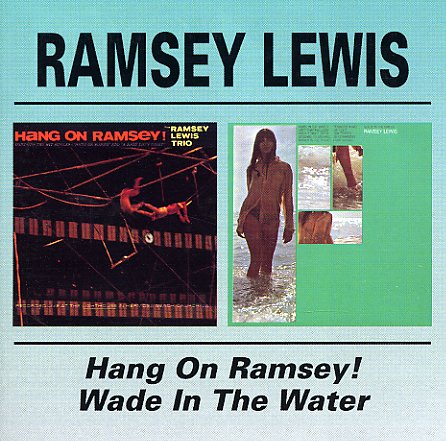 Hang On Ramsey/Wade In The Water

Ramsey Lewis grooving in 2 of his best modes of the 60s – live, and with funky studio backings from Richard Evans! Hang On Sloopy is easily one of Ramsey Lewis' most successful records – done in the hit soul jazz style that he forged with the Young/Holt rhythm combo, honed to perfection before a live crowd at The Lighthouse in Hermosa Beach. The record's a key part of Ramsey's live recorded output – showing the trio in pyrotechnic form before the kind of packed-house audiences they were playing to nightly at the time. Includes swinging versions of "Hard Day's Night", "High Heel Sneakers", and "Hang On Sloopy" – plus the original cut "Movin Easy". On the album Wade In The Water, Ramsey's funky piano is backed by some soulful arrangements handled by Richard Evans – in a really tight style that includes great percussion, electric bass, and an all-out kicking style that makes even the mellowest tunes groove! Evans really adds a lot to the set – expanding the core groove of the Lewis trio with a proud and righteous Chicago approach – really bringing some "soul" to the soul jazz sound of the group, with incredible results! Titles include "Money In the Pocket", "Wade In the Water", "Ain't That Peculiar", "Up Tight", and "Hold It Right There".  © 1996-2023, Dusty Groove, Inc.

Piano Player
Cadet/Universal (Japan), 1969. New Copy
CD...$12.99 14.99 (LP...$2.99)
One of Ramsey Lewis' best albums of the 60s – a killer Cadet record that stands right up there with classics like Maiden Voyage and Mother Nature's Son! As on those records, arrangements here are mostly by Charles Stepney, who comes up with that righteous blend of soul, strings, and jazz ... CD