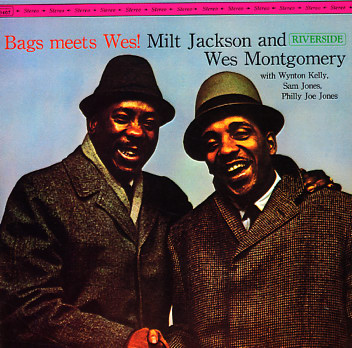 Also available
Milt Jackson & Wes Montgomery — Bags Meets Wes! (with bonus tracks) ... CD 5.99
A beautiful combination we'd like to hear more of – one that comes from the meeting of Milt Jackson's vibes and the guitar of Wes Montgomery – both recorded here in easygoing brilliance! The session's a nice break from the usual sound of both players at the time – and although Wes played a bit with vibes when working in The Montgomery Brothers, the Jackson approach here is a bit different – more soulful, and a bit more driven on by the rhythm section of Wynton Kelly, Sam Jones, and Philly Joe Jones. Titles include the originals "SKJ", "Blue Roz", "Jingles", and "Sam Sack" – plus versions of "Stairway To The Stars (take 2)", "Stablemates (take 2)", "Jingles (take 8)", and "Delilah (take 3)".  © 1996-2022, Dusty Groove, Inc.
(Please Note – CD case has a small cutout hole.)