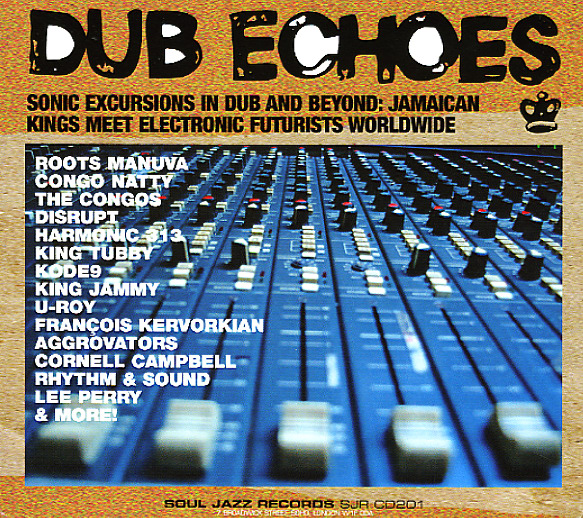 The soundtrack to the excellent Dub Echoes documentary and a wild trip across the landscape of dub, both new and old! Syncopated rhythms, deep, dark bass, and cosmic reverb and echo abound on this fine set that connects the modern dubstep scene with heavyweight Jamaican originators of the sound. While it would take a massive box set to cover even a portion of the music featured in the film, the selector's at Soul Jazz of kept this set nicely concise, tight and right all the way through! 17 numbers in all, including "Witness (One Hope) (Walworth road rockers dub)" by Root sManuva, "Sega Beats" by Disrupt, "Forever More" by Dub Syndicate, "Psalms Of Drums" and "Ruffer Version" by King Tubby, "Sine Of The Dub" by Kode9 & The Space Ape, "Rootsman" by U Roy & Francois Kevorkian, "King In My Empire" by Rhythm & Sound with Cornell Campbell, "Deb Dub" by Digital Dubs Vs Dubiterian, "Congo Man Chant" by the Congos and "Rejoicing Skank" by the Upsetters.  © 1996-2022, Dusty Groove, Inc.

Jamaican Soul Shake Vol 1 – Sound Dimension At Studio One
Studio One/Soul Jazz (UK), 1960s/1970s. Used
CD...$14.99
Classic Studio instrumentals from the hottest house band in the history of Jamaican music! Alongside the Skatalites the Sound Dimension were responsible for crafting the tunes and rhythms that emanated from Coxsone Dodd's Studio One label from the very dawning of the reggae age, and what better ... CD

Nice Up The Dance – Two Worlds Clash
Soul Jazz (UK), 1990s. Used
CD...$11.99
Massive! If you're speakers can't cut it, this compilation'll send you shopping for a new set with some healthy sized woofers! Another fine selection of rump bumpin' thumpers from the selectors at Soul Jazz, who've shown time and again with their now well known series of reggae compilations that ... CD