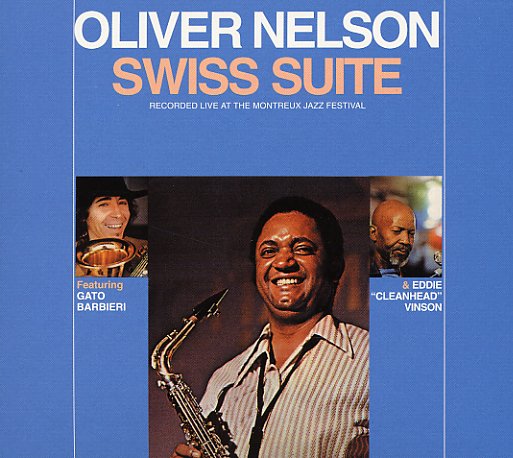 A killer set of searing soulful spiritual material from Oliver Nelson – and one of his best albums of the 70s! There's hardly anything "Swiss" in the music – save for the fact that it was recorded at the Montreux Jazz Fest – as the large ensemble recording has Nelson at the helm of a very hip group of musicians – really stretching out into territory that's more Strata East than any of his other work, especially on the title track! In addition to the tenor from Gato Barberi and alto from Eddie Vinson – both featured on the title – the set also features Charles Tolliver and Harry Beckett on trumpets, Bosko Petrovic on vibes, Na Na on barimbau, Bernard Purdie on drums, and Stanley Cowell on piano. Side one features the soaring "Swiss Suite" – an extended number done for the set – and side two has a bit more Nelson touches coming into play with the progressive lineup – on titles that include "Stolen Moments", "Black Brown & Beautiful", and "Blues & The Abstract Truth".  © 1996-2021, Dusty Groove, Inc.

Louis Armstrong & His Friends
Flying Dutchman/Boplicity (UK), 1970. New Copy
CD...$8.99 14.99 (CD...$13.99)
Louis Armstrong hits the Flying Dutchman label – and unlocks a whole new spiritual side of his talents – a mode that's quite different than some of his crossover pop of the 60s! The style here has a bit of righteous elements in the lyrics, and lots of spiritual jazz in the backings ... CD

Friends and Neighbors - Ornette Live At Prince Street
Flying Dutchman/BGP (UK), 1970. New Copy
CD...$8.99 14.99 (CD...$14.99)
One of the most compelling albums we've ever heard from Ornette Coleman – and a set that's very different than some of his other work for different labels – particularly his better-known material for Blue Note and Atlantic! The album's got a righteous feel that's right up there in the ... CD

Louis Armstrong & His Friends
Flying Dutchman/Ultra Vybe (Japan), 1970. New Copy
CD...$13.99 (CD...$8.99)
Louis Armstrong hits the Flying Dutchman label – and unlocks a whole new spiritual side of his talents – a mode that's quite different than some of his crossover pop of the 60s! The style here has a bit of righteous elements in the lyrics, and lots of spiritual jazz in the backings ... CD