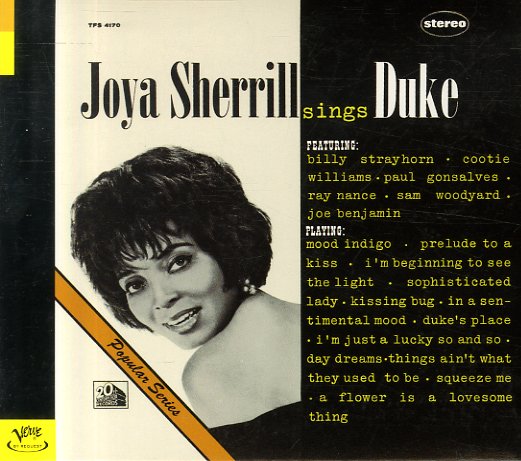 One of the best recordings we've heard from Joya Sherrill – a set that has her taking on the music of Duke Ellington, but handling things with a cool sort of 60s feel! The arrangements are nice and lean – handled by Mercer Ellington, and featuring players who include Cootie Williams on trumpet, Ray Nance on cornet, Johnny Hodges on alto, and Paul Gonsalves on tenor – all working with Joya in formations that are much more small combo than the usual Ellington mode. Sherrill's vocals sparkle nicely in the setting – with a sense of poise and class that updates the older themes nicely. Titles include "Day Dreams", "In A Sentimental Mood", "Kissing Bug", "Mood Indigo", "Prelude To A Kiss", "Sophisticated Lady", "Duke's Place", and "A Flower Is A Lovesome Thing".  © 1996-2021, Dusty Groove, Inc.
(Out of print.)