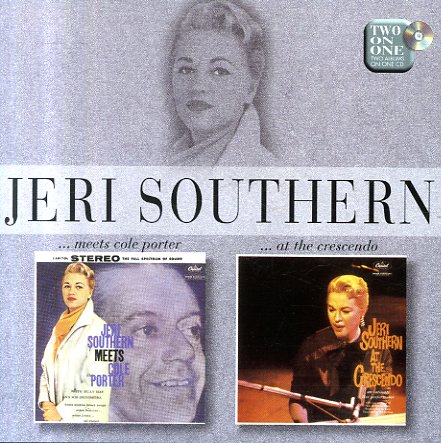 A set of lovely, beautiful vocals from Jeri – with good natured, brass flavored arrangements by Billy May – excellently done, with a variety of moods from sweet and playful, to grand and romantic. Great stuff! Titles include "Don't Look At Me That Way", "Get Out Of Town", "Looking At You", and "It's Bad For Me". Great proof that Jeri Southern's a hell of a jazz singer in just the right setting – and this album's just the right setting! The set features Jeri live at the Crescendo – working with small group backing at the famous LA nite spot – including piano from Dick Hazard, who also arranges the combo on most tracks too – balancing core piano trio styles with some light cello that really sounds wonderful – used in slight ways to echo larger strings, but still leaving the rest of the group to move in gentle torch jazz modes. Jeri plays piano herself on a few tracks – and titles include "Remind Me", "Blame It On My Youth", "You Better Go Now", "I'm Just A Woman", "I Thought Of You Last Night", "I Get A Kick Out Of You", and "Dancing On The Ceiling".  © 1996-2021, Dusty Groove, Inc.
(Out of print.)

Horace
Fremeaux & Associates/Elephant (France), 2001. Used
CD...$18.99
One of the first great collaborations between spiritual jazz vocalist Dwight Trible and producer Carlos Nino – a set that's got all the righteous power of some of our favorite jazz vocal sets from the early 70s! Trible's a singer with a sound that's amazing – partly linked to the modes ... CD