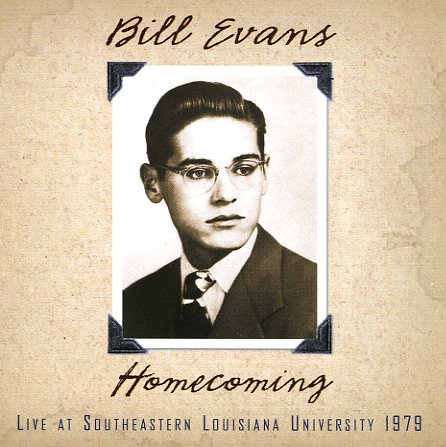 Bill Evans returns to his alma mater – playing a live set at Southern Louisiana University in the late years of his career – recorded in a way that's quite different from some of his other concert sets of the time! There's a nice amount of echo in the recording – so you really have a strong feel for the room – Bill's lines stretching out beautifully in space, filling the room with waves of sound that might be more at home on the ECM label, especially given Evans' laidback playing at points. Trio members include Marc Johnson on bass and Joe LaBarbera on drums – and titles include "Very Early", "Turn Out The Stars", "MASH", "Re Person I Knew", "Midnight Mood", and "Minha".  © 1996-2022, Dusty Groove, Inc.
(Out of print, punch through barcode and promotional stamp on CD.)