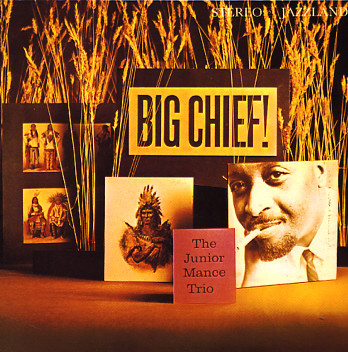 Junior's the Big Chief on this one – coming down hard and soulfully on the keys, in a style that's sprightly, yet which also matches the more soul-drenched styles of some of his early 60s contemporaries! The backing is surprisingly sensitive at times – with contemplative bass from Jimmy Rowser, and soft-then-hard drums from Paul Gusman – a great player who really makes this set sparkle nicely. And Junior's work on the keys is pretty darn great too – freed from some of the cliches that might creep into a session like this, and really matching the sensitivity of the rhythm on the best numbers. Titles include "Swish", "Filet Of Soul", "The Seasons", "Big Chief", "Summertime", and "Little Miss Gail".  © 1996-2021, Dusty Groove, Inc.
(Out of print, includes obi.)

Solar
Jazzland/OJC, 1962. Used
CD...$11.99
An obscure little quartet session from Red Garland – recorded with Les Spann on both guitar and flute, caught at a time when he was just starting to make waves on the New York scene! The presence of Spann gives the record a decidedly different feel than most of Garland's work on Prestige ... CD

IE
Jazzland (Norway), 2016. Used
CD...$12.99
One of the most dynamic records we've ever heard from Eivind Aarset – a set that's got all the offbeat electronics of his other albums, but which sometimes comes across with a lot more drive and direct power overall! Some points almost have a full-on fusion feel – with drums that ... CD