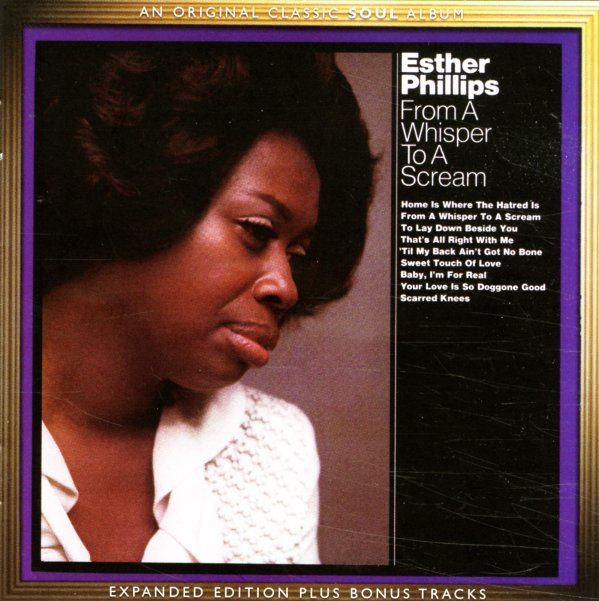 From A Whisper To A Scream (with bonus tracks)

One of our favorite-ever albums from Esther Phillips – an album that really helped her transform her sound for the 70s! The approach here is a lot more jazzy than before – served up with a good dose of funk, thanks to arrangements from Pee Wee Ellis – fresh from his work with James Brown, but even more electrically-oriented here! The groove is great – and the album's one of the best Kudu sides from the early 70s – a perfect blend of soul, jazz, and funk – all wrapped up with a new level of sophistication that benefits all parties involved. Other players include Richard Tee on keyboards, Eric Gale on guitar, Bernard Purdie on drums, Airto on percussion, and Hank Crawford on alto sax. Titles include an incredible cover of Gil Scott Heron's "Home Is Where The Hatred Is", plus "From A Whisper To A Scream", "Till My Back Ain't Got No Bone", "Your Love Is So Doggone Good", Scarred Knees", and "Baby, I'm For Real". CD features great bonus tracks – "Brother Brother", "Don't Run To Him", "A Beautiful Friendship", and "How Blue Can You Get".  © 1996-2021, Dusty Groove, Inc.