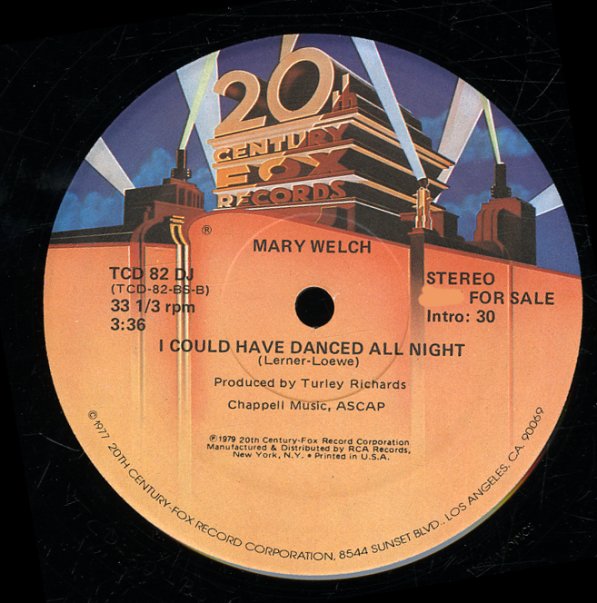 I Could Have Danced All Night (long, short)

(Promo in a 20th Century sleeve. Sleeve and labels have some marker.)

Whatcha Gonna Do With My Lovin'?/Put Your Body In It
20th Century, 1979. Very Good+
12-inch...$19.99
Stephanie Mills gets some wonderful help from the team of Mtume and Reggie Lucas on this one – stepping up in a warm, full groove that really sends the track over the top – and which sounds great here in an extended 8 minute version! 12-inch, Vinyl record

My Cherie Amour (double a-side promo)
20th Century, 1979. Near Mint-
12-inch...$2.99
A warmly clubby remake of Stevie Wonder's big hit of a decade before – served up here in a surprisingly nice version! Triple S Connection don't try to do too much with the tune – just glide along nicely with the fuller disco backings, and sometime soar and scat with the grooves! 12-inch, Vinyl record

It's Ecstasy When You Lay Down Next To Me/I Never Thought I'd Fall In Love With You
20th Century, 1977. Near Mint-
12-inch...$11.99
A funky funky thumper from Barry White – and one of his last truly genius tracks! "Ecstasy" is presented here in a long long version that lets the tune's initial bass and drum interplay stretch out magnificently – sliding and slinking along in a classic White-styled groove, ... 12-inch, Vinyl record

Body Slam/I'd Rather Be With You
Warner, 1982. Very Good+ (pic cover)
12-inch...$8.99
Although the single was issued in 1982, Warner dug back to 1976 for "I'd Rather Be With You", an incredible slow-funk groover that's one of Bootsy's best cuts ever, and which was eventually given an excellent hip hop remake. 12-inch, Vinyl record