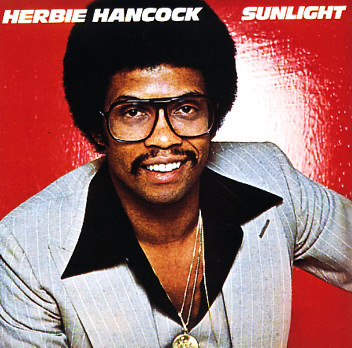 An overlooked little gem in Herbie Hancock's 70s catalog – and a sweet set of funky tunes that adds an R&B edge to the Headhunters sound! Herbie's playing a heck of a lot of keys on the set – from Arp to moog to Rhodes, and everything in between – but the album never gets too crazy, and has a really nice laidback soulful approach that grooves along wonderfully on a small number of very extended tunes! Other players include Headhunters stalwarts Paul Jackson on bass, Bennie Maupin on reeds, Patrick Gleeson on electronics, and Bill Summers on drums – and Herbie does some cool singing through the keyboards in a spacey voice that's really great! Titles include "Good Question", "Sunlight", "Come Running To Me", "I Thought It Was You", and "No Means Yes".  © 1996-2023, Dusty Groove, Inc.
(French digipak pressing. Cover has light wear.)

My Point Of View (RVG remaster edition)
Blue Note, 1963. Used
CD...$8.99
Classic Herbie Hancock from the early years – and a great mix of soul jazz and modernist inspiration! The record include a nice groovy "hit" – Herbie's "Blind Man Blind Man" – an obvious follow-up to "Watermelon Man", but still a standout track with ... CD

Headhunters
Columbia, 1974. Used
CD...$3.99 (LP...$39.99, LP...$41.99)
A seminal jazz funk session of the 70s – Herbie Hancock's legendary meeting with The Headhunters, and a killer batch of tunes that really gave the combo their name! Herbie's playing a wide range of keys here – including Fender Rhodes, clavinet, and Arp – but almost even better is ... CD

Prisoner (non RVG edition)
Blue Note, 1969. Used
CD...$4.99 6.99 (CD...$8.99)
A nice late Blue Note change from Herbie Hancock – a very different album than his previous sets for the label – in that it features a slightly larger group, and a sound that really points the way towards his directions in the 70s! There's a slightly ambitious feel to some of these ... CD