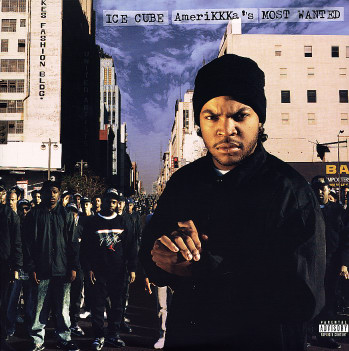 Also available
Ice Cube — AmeriKKKa's Most Wanted ... CD 5.99
The solo debut masterpiece from Ice Cube – who links with Bomb Squad for the incredible production! When Ice Cube left NWA he took a lot of the more sobering lyrical aspects of that landmark crew with him, and with the addition of the Bomb Squad's cut & paste rhythms and jackhammer funk, and a bit of new ally Chuck D's social muckraking skills, he created one of the greatest hip hop albums of the 90s. Ice Cube at his solo peak! Features the unbeatable title track, "A Gangsta's Fairytale", "Better Off Dead", "Endangered Species" with Chuck D, "Turn Off The Radio", "Who's The Mack?", "To Come Here", "Once Upon A Time In The Projects" and more.  © 1996-2022, Dusty Groove, Inc.
(BMG club pressing.)

Efil4zaggin (remastered edition – with bonus tracks)
Priority, 1991. Used
CD...$8.99
A stone classic from the west coast scene – and a record that just seems to get better and better over the years! What sounded like a disappointing, and way too calculatedly provocative follow-up to Straight Outta Compton back in 1991 now sounds to us like the peak of Dr. Dre's career as a ... CD

Midnight Marauders
Jive, 1993. Used
CD...$6.99
A masterpiece from prime era Tribe Called Quest! Midnight Maurauders was Tribe's third LP, and even though there were no tracks yet credited to the Ummah, this is pretty much the beginning of Tribe's transition to that sound – with the same mellow, laid back vibe as their best early material ... CD

Ill Communication
Grand Royal, 1994. Used
CD...$4.99
What can we say? The Beasties rise to an even higher level with their manic trio hip hop style mixed with the live jazz/funk/garage rock sounds and keyboards by Money Mark – featuring a bunch of their classic hits and underappreciated album cuts alike. They could really do no wrong at this ... CD

Imani Vol 1
OGM/Quannum, 2015. Used
CD...$7.99
Gift Of Gab and Chief Xcel's first new Blackalicous record in a decade – and to our ears, their finest since Blazing Arrow! For longtime fans, it's so gratifying to give a first listen and hear these guys still kicking it as fresh as ever. Gab's breathless fast raps and more measured soul ... CD