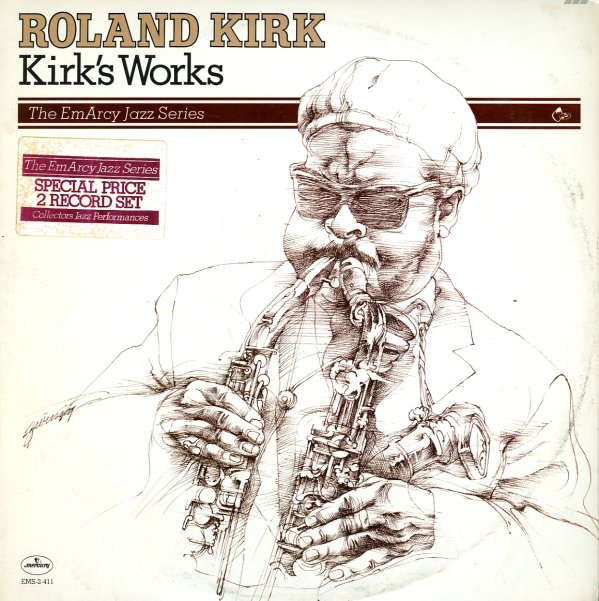 Cool 2LP collection of some of Roland Kirk's best stuff from his Mercury years, including a motherlode of tracks that are very very hard to find on LP! Tracks include "Reed & Deeds", "Rip Rig & Panic", "Where Monk & Mingus Live", "Get Out Of Town", "The Haunted Melody", "Between The Fourth & Fifth Step", "Black Diamond", "Domino", "Meeting On Termini's Corner", "Raouf", and "No Tonic Pres". Very cool, very hard, and with loads of Roland's cool reed work!  © 1996-2021, Dusty Groove, Inc.
(Cover has a cut corner, light wear, and a name in pen.)

Kirk In Copenhagen
Mercury, 1963. Near Mint-
LP...$44.99
A rare slice of work by Roland Kirk from his early years – a great live set recorded in Europe in the mid 60's – done in a looser mode than his studio sessions from the time! Kirk's playing his usual array of incredible horns – tenor, stritch, flute, nose flute, and manzello ... LP, Vinyl record album

Quintet Vol 2
EmArcy/Mercury, Mid 50s. Very Good+ 2LP Gatefold
LP...$7.99
Second volume pulled together in the early 80s of Brownie's remarkable work with a smoking quintet that would record some of the finest bop sides issued on the Emarcy label. He's working here with Max Roach, George Morrow and Richie Powell and either Sonny Rollins or Harold Land as Brown's foil in ... LP, Vinyl record album

Portrait Of Sonny Criss
Prestige, 1967. Near Mint-
LP...$16.99
The great altoist Sonny Criss is one of our favorite-ever reed players, and this beautiful session from his late 60's "comeback" period is a loving portrait of the wide range of his deep deep talents! On the surface, the record is deceptively simple, and only features Criss' work on alto ... LP, Vinyl record album