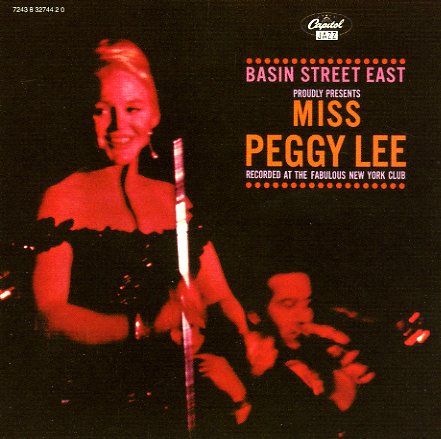 Peggy Lee's at Basin Street, but the set's an upbeat, swinging date that's right up there with her studio work for Capitol in the 60s! The album's billed as an "after hours" performance – and it's definitely got the relaxed feel to live up to that promise – a feel that's more small combo jazzy than other Lee work of the period, although it's still got that upbeat punch we love from the Capitol years. The group is directed by Joe Harnell, who also plays piano – and other members include Bob Donovan on flute, Willie Thomas and Phil Sunkel on trumpets, Dennis Budimir on guitar, and Chino Pozo on congas and bongos. Titles inlcude "I Got A Man", "The Second Time Around", "Fever", "Moments Like This", "Day In Day Out", and "Them There Eyes". CD also features a bonus track – "Call Me Darling".  © 1996-2021, Dusty Groove, Inc.
(Out of print.)